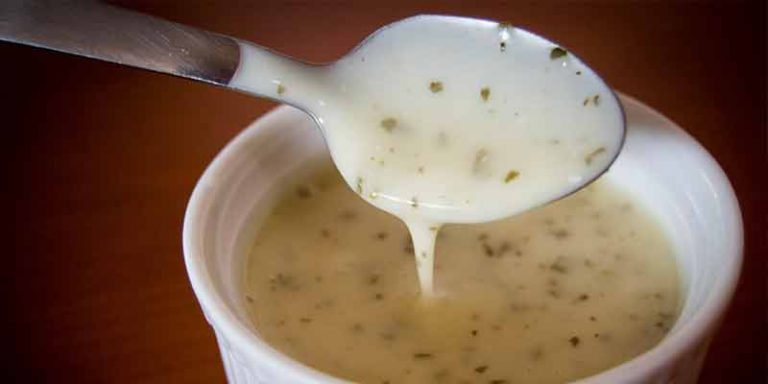 Ranch dressing is a popular sauce due to its versatility. You can use them as a salad dressing, making dipping sauces, or used in a recipe to enhance the flavors. Ranch dressing can be bought from the store or made at home. If you have ranch dressing, you may wonder if it goes bad or not.

Ranch dressing or sauce does go bad after a while. It will depend on many factors such as if it’s store-bought, where it’s stored, and the storage temperature.

Ranch sauce from the grocery store has a lot of preservatives and additives added to them, so it’s made to last a long time whether it’s open or not.

If you left the bottle of ranch dressing out on the counter, it can go bad quickly due to bacteria growth. It’s important that once the sauce is used, place it back into the fridge as soon as possible.

It’s fine to consume as long as it tastes good and there are no molds in the dressing.

Store-bought ranch dressing lasts for about 6 months in the refrigerator if it has been opened. If the dressing has not been opened yet, you can store them in the pantry, which will last for 12 to 18 months due to preservatives and additives.

Nothing beats fresh ranch dressing prepared from scratch. Regrettably, it does not last very long. You only have four days from the time you create ranch dressing to consume it before it spoils.

How To Tell If Ranch Dressing Is Bad?

Bad odor: You won’t have to wonder if ranch sauce smells bad when you open the bottle. It will either have a cool ranch aroma or a foul vinegary odor. There will be no middle ground. The vinegar smell is caused by bacterial buildup and should not be consumed.

Mold: You may see little bits of mold forming around the opening of the ranch sauce bottle and on the plastic container as the expiration date of the sauce approaches. Even if mold is forming on the exterior of the bottle but not in the dressing, the container must be thrown away since it is unsafe.

Any food that has been contaminated with mold should never be consumed. There are many people who believe that if they remove or relocate some mold from their food, it will be safe to eat. That, on the other hand, is not the case.

Swollen bottle: Never take the sauce from a swollen container. Foodborne bacteria are growing in a bottle that’s swollen, which can give you food sickness if you consume it.

If it’s been sitting in the cupboard overnight, it’s fine to put it in the refrigerator as soon as you discover it. The item should be discarded and replaced if the item has been open for several weeks or months and has not been properly stored in the cabinet. The milk and cheese in the dressing will almost definitely go bad before it gets to the table.

Can You Eat Ranch Dressing That Has Expired?

While consuming expired items is never a good idea, the fact that the expiration date has passed does not mean that the food has gone bad. If you place your ranch sauce in the refrigerator as soon as you open it, you will be able to extend its shelf life significantly.

Ranch sauce can be used up to two months beyond its expiration date if it has been stored in the refrigerator and has retained its freshness in both scent and flavor.

Ranch Dressing Has Gone Bad – Here Are Some Substitutes

Ranch dressing is recognized for its wonderfully creamy texture and refreshing flavor, so look for sauces with similar characteristics.

For store-bought ranch dressing, once you get home, put your ranch sauce somewhere away from direct sunlight and heat. The place I recommend is in the pantry or cupboard, where it will be less likely to be affected by temperature changes.

Instead, place the sauce at the back of the fridge where it’s less likely to be affected by temperature change.

For homemade ranch dressing, place them in an airtight jar and store them at the back of the fridge. Make sure you consume it within four days.

Does ranch dressing have mayonnaise in it?

Ranch dressing is a salad dressing that is usually made from garlic, salt, onion, mustard, herbs, buttermilk, and spices. It’s them mixed into mayonnaise or another oil emulsion.

Can you freeze ranch dressing?

You can, but it’s not recommended freezing ranch dressing. Due to buttermilk as one of the ingredients used, you’ll be left with a flavorless, clumpy, and bitter-tasting sauce when it’s thawed.

A passionate cook and stay-at-home mom. Since I spend most of the time in the kitchen, keeping the pantry clean and organized is a top priority. Besides being a clean freak, I enjoy gardening, hiking and other activities under the sun.