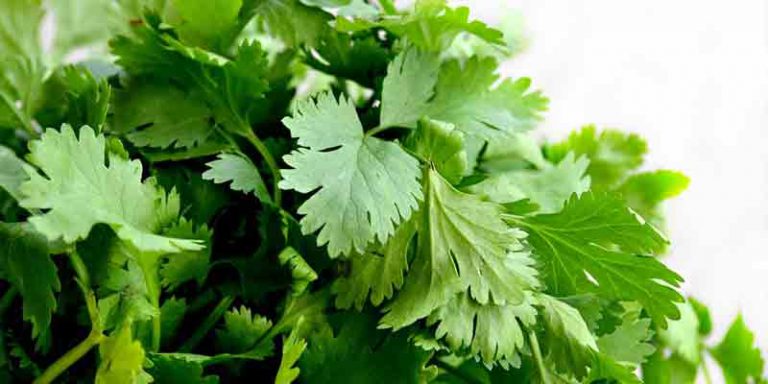 Cilantro has a distinctive flavor that brings zing to a lot of dishes. This herb is popular to use in many dishes around the world. Most people will usually buy a bunch and only use a few leaves. With the leftovers, can you freeze cilantro to save them for later?

Can you freeze cilantro? Yes, you can freeze cilantro. You can either freeze them whole or as ice cubes. Properly stored, cilantro will last for up to 6 months in the freezer. Due to their delicate texture, they need to be prepped first to withstand the freezing temperature.

Like most herbs, cilantro freeze very well. The herb will retain its distinct flavor in the freezer.

As for their texture, cilantro will become mushy when it’s frozen and thawed. If you’re planning to use it to garnish a salad or other dishes, frozen cilantro will not work.

Besides cilantro, this also affects other herbs as well, especially those that are soft. This includes parsley, chives, and mint.

How To Freeze Cilantro

Using this method, there’s not much prepping, and you can freeze them within 5 minutes.

Start by cleaning the cilantro with water. This will remove dirt, bugs, and debris from the herb.

Once it’s cleaned, place the cilantro into a colander and leave it to air dry.

To help speed up the drying process, you can use a dry paper towel or napkin and gently press on the herb. This will absorb the moisture from the cilantro.

Due to cilantro leaves being very fragile, they can easily turn to mush while being frozen. To help protect them from the cold and turning to mush, you can use olive oil.

With the olive oil, pour a small amount on the cilantro leaves. Make sure that each leaf is coated lightly with the oil.

If you don’t have olive oil, you can use avocado oil or vegetable oil to coat the cilantro leaves. However, it may taste a bit different.

Get out one or more freezer bags and put the oiled cilantro in them. Avoid putting too much where the herb will be cramped.

Once that’s done, squeeze the bag to remove any excess air from it and seal it tightly.

Write down the date of freezing on the freezer bags and place them into the freezer.

This method is great for freezing in portions. You can freeze cilantro ice cubes in smoothies and other recipes that require blending.

To ensure that the cilantro freeze well, make sure to use only the freshest cilantro.

Below are the instructions for freezing cilantro ice cubes:

Start by cleaning the cilantro with water to remove dirt, bugs, and debris. Once clean, place them into a colander to let them air dry.

Pick the leaves off the stem. You’ll only want to freeze the leaves for this method. If there are any discolored leaves, discard them.

Pack the leaves into each slot of the tray. Fill them around two-thirds of the way.

Top off each slot with water. Then place the tray of cilantro leaves into the freezer. Flash freeze them for about 2-3 hours. This method prevents the ice cubes from sticking to each other when it’s frozen. Also, it will make it easier for you to remove some ice cubes, rather than the whole content.

Once the cilantro ice cubes are completely frozen, remove them from the freezer. Immediately transfer them to an airtight container or freezer bag.

If you’re using freezer bags, squeeze out the air from the bag before sealing it tightly.

If you’re using an airtight container, check the seal on the lid for damages first. If there are none, secure the lid to the container as tightly as possible.

With a marker, write down the date of freezing on the airtight container or freezer bag. Then place them into the freezer.

How Long Can You Freeze Cilantro?

You can freeze cilantro for up to 4 months. The longer that it’s stored in the freezer, the greater the chance it will deteriorate in flavor and texture. This is why it’s recommended to use them within 4 months.

After 4 months, the cilantro will still be safe to use, but you won’t enjoy the taste of it very much.

How Do You Defrost Cilantro?

The great thing about cilantro is that most of the recipes that it’s going to be used for don’t require thawing.

For making soups and stews, you can simply remove the amount of cilantro ice cubes from the freezer and add them directly to the pot while it’s cooking.

If you’ve frozen them in a freezer bag, before using them, you should leave them in the fridge to thaw first.

Can You Refreeze Cilantro?

Due to their delicate texture, it’s not recommended to refreezing cilantro. Repeated freezing and thawing will cause the herb to deteriorate greatly. After it thaws for the second time, cilantro will become very mushy.

To avoid having to refreeze cilantro, you should freeze them in ice cubes or small portions. This way, you won’t end up with leftovers and have to refreeze the cilantro.

Other Questions about Cilantro

Can you freeze cilantro stalks?

The stalks are a bit tough, but it has a lot of flavor and nutrients. They are great for blending into soups and stews.