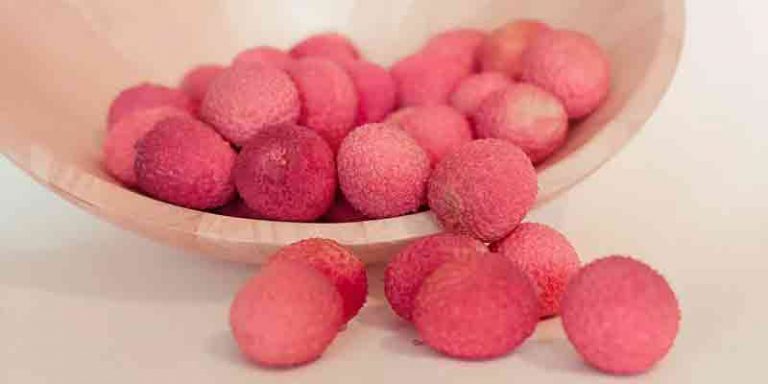 Lychee is a tropical fruit that’s abundant during spring. This fruit is versatile and can be eaten fresh, made into jelly, or make smoothies out of it. While lychees are available a short time each year, you may want to store them for later. Would freezing lychees be an option?

Can you freeze lychees? Yes, you can freeze lychees. Due to their high water content, this fruit freeze very well. Before you freeze them, make sure it’s ripe first, so it will have that sweet taste to it. Properly stored in a freezer bag will keep them fresh for up to 6 months.

Yes, lychees are one of those fruits that freeze quite well. This is due to their high water content.

While it’s freezing, the longer you keep them in the freezer, the outer skin will start to discolor. This is from oxidation, and it doesn’t damage the fruit.

The skin is tough enough to protect the flesh inside from going bad. It helps prevent air from reaching the flesh and retain the moisture in the fruit.

While it seems that the fruit has discolored outer skin and tough, the fruit instead is perfectly fine. If you thaw lychees within 6 months, you will enjoy the taste of it just like when they are fresh.

How To Freeze Lychees

When it comes to freezing lychees, it’s pretty much straightforward. It doesn’t require a lot of time preparing it, and you can have them in the freezer within 10 minutes.

Before you freeze lychees, make sure that they are ripe first. Unripe lychees will be bright green. As they ripen, they will become darker red. When it is ripe, this is when you can freeze lychees.

If you try to freeze lychee while it’s unripe, it will become very bitter when you thaw it.

Below are the steps in details to freezing lychees:

Start by rinsing all the lychees first. This will remove any bugs and debris from the fruit.

Pull the lychee off their stem. You’ll want to just freeze the fruit to save space.

Place the lychee into the freezer bag or an airtight container. Make sure that the fruit is not too cramped. If it is, the pressure could cause some of them to break during freezing.

If you’re using a freezer bag, squeeze out any excess air before sealing it. For an airtight container, check the seal around the lid to ensure there is no damage. If there are none, secure the lid to the container tightly.

With a marker, write down the date of freezing. Then place them into the freezer for storage. Lychees that are stored in a freezer bag should not have anything else stack on top of them in the freezer.

Can You Freeze Canned Lychees?

Yes, you can freeze canned lychees, but without the tin can. You’ll have to transfer any leftovers to an airtight container.

If the can of lychee has not been open, and you try to freeze it, the can will break. This is due to the water that’s in the can. As it freezes, the water will expand and break the can open.

Instead, it’s best to store an unopened can of lychees in the pantry. Keeping them there where it’s cool and dry will have the same shelf life as it would in the freezer.

How Long Can You Freeze Lychees?

Lychees will last a good 6 months in the freezer. After that, the quality of the tropical fruit will start to deteriorate. You’ll still be safe to eat them, but they won’t taste very good. The lychee will be mushy and lose most of its sweet flavors.

How Do You Defrost Lychees?

The best method would be to thaw them in the fridge. Remove them from the freezer and place them into a bowl to collect the melting ice. Then let it sit in the fridge overnight to thaw.

If you need lychee much sooner, you can place them into a bowl of cool water. Make sure the fruit is still in the bag. Change the water out every 10 minutes until the lychee is thawed.

Can You Refreeze Lychees?

When it comes to refreezing lychees, this is not something we would recommend. Doing so could cause the fruit to lose its texture and taste. They can become mushy and bland, which is something you will not enjoy.

However, if lychees have not thawed completely yet, you can refreeze them again. This means the fruit should still be 90% frozen.

Other Questions about Lychees

Can you freeze lychee jelly?

Yes, you can freeze lychee jelly, both store-bought and homemade jelly. If you are freezing homemade jelly, make sure that it is properly set before freezing it. Lychee jelly can last for up to 1 year in the freezer. For best quality, it’s best to thaw and eat it within 6 months.

Can you freeze peeled lychees?

Yes, you can freeze peeled lychees. You need to be extra careful not to damage them even further. If possible, freeze the fruit with the seed inside. The seed will help prevent the lychee from collapsing. Once it thaws, you can remove the seed and eat the flesh.