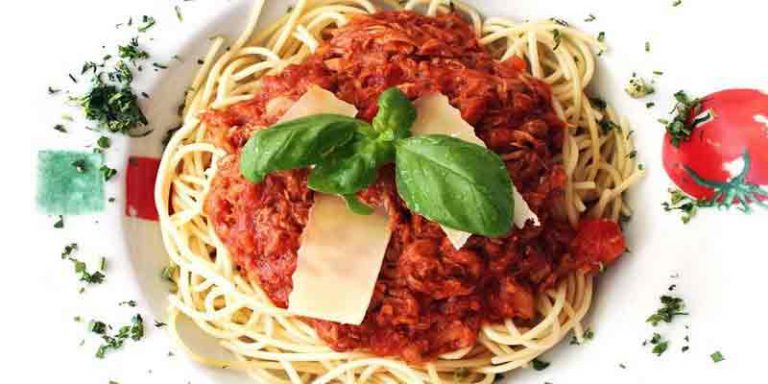 Spaghetti is one of that food that require sauces to make it taste good. The sauce is what gives the flavor that people enjoy. The sauces are usually tomato-based with other ingredients added. The most popular ingredients are herbs and vegetables. These ingredients once mixed with the tomato sauce will decrease the life span of the spaghetti sauce.

How Long Does Spaghetti Sauce Last?

If you bought spaghetti sauce from the store, it will usually have a “best by” date printed on the jar. This date isn’t an expiration date for when it’s bad. It’s just a date showing how long the product will be at the best quality. Once the spaghetti is past the “best by”date, the quality of the sauce will start degrading slowly.

If the bottle of spaghetti sauce hasn’t been opened yet, the sauce will last for at least 3 to 5 months after the printed date on the bottle. However, it could last a couple more months if it’s properly stored in the pantry or the fridge. If it’s been sitting somewhere that it’s being exposed to sunlight often, the spaghetti sauce will not last long.

An opened jar of spaghetti sauce goes bad quickly because once it’s opened, it’s exposed to the bacteria in the air. After opening the jar, you should plan on using it within a couple of hours. If not, it should be moved to the fridge right away. The longer it stays out at room temperature, the faster the quality of the sauce will bad.

There’s nothing better than making your own spaghetti sauce at home. All the ingredients you’ll be using will be fresh, so it will be at’s peak quality. Most people will usually prepare the spaghetti sauce and use it right away.

If you’re not planning to keep them for a later day, they should be stored in the fridge right away. Due to the sealing process which isn’t available at home, homemade spaghetti will last about three to four days in the fridge.

If you want to keep them longer than 4 days, the next best option is to freeze the spaghetti sauce.

How to Store Spaghetti Sauce?

Unopened spaghetti sauce that is bought at the store should be stored in a cool and dry place. The pantry is a great place to store spaghetti sauce. If the pantry isn’t an option, you can store it elsewhere in the kitchen, as long as it’s not stored in direct sunlight.

Once the spaghetti sauce jar has been opened, it should always be stored in the fridge. Keeping them outside the fridge will shorten their shelf life quickly due to the sauce being exposed to bacteria already.

For spaghetti sauce that is made from scratch, it should always be stored in the fridge. However, if you canned it, the sauce can be stored outside the fridge, but in a cool and dry place.

Can You Freeze Spaghetti Sauce?

Freezing spaghetti sauce is possible depending on what ingredients are being used. If it’s made out of creamy, emulsified ingredients, it shouldn’t be frozen and is not recommended. These sauces are likely to split when it’s frozen, in which the texture, flavor, and overall consistency will change.

If the spaghetti sauce is made with a tomato base, freezing it is possible and recommended if you’re planning to store it for a long time.

When freezing the sauce, be cautious of what ingredients you’ll be using. Certain herbs and vegetables don’t freeze well. Some popular herbs to use in spaghetti sauce are basil, sage, rosemary, and thyme. These herbs add an excellent flavor in addition to the tomato sauce.

However, these herbs tend to add bitterness to the sauce if it’s left frozen for a long time. If you’re planning to use herbs, it’s best to add them later when you are ready to prepare the sauce for cooking.

As for vegetables, there are certain vegetables that may not freeze well either. Some vegetables like celery and rhubarb will change in consistency when frozen due to their high water properties.

Therefore, to get the best result when freezing spaghetti sauce, it’s best to freeze them without or with a little number of ingredients in it. Once you are ready to use the sauce, simply thaw it and add the ingredients to it.

When freezing spaghetti sauce, always put the sauce in an airtight container or a resealable freezer bag. It’s not recommended to store them in a glass jar as it could fracture when the sauce expands during freezing.

Remember to consume frozen spaghetti sauce within 3 months. After that time, the sauce may experience freezer burn which will affect the taste of the sauce.

How To Freeze Spaghetti Sauce

Spaghetti sauce is simply to freeze. A plain tomato-based sauce without any ingredients is the easiest to freeze. A sauce that has a lot of ingredients added to it already will be a bit difficult to freeze, but not impossible.

Below are simple steps to preparing the spaghetti sauce for the freezer:

To thaw the spaghetti sauce, simply remove it from the freezer and place the container or freezer bag on a plate. Then put it in the fridge to let it thaw.

How To Tell If Spaghetti Sauce Is Bad?

When spaghetti goes bad, it’s quite simple to tell. There are a few signs you can look for. One of them is mold in the jar of the spaghetti sauce. Mold usually occurs after the jar is opened and this is due to bacteria. After the jar has been opened, the sauce is exposed to the bacteria in the air. After being stored for a while, mold will start to appear in the jar. If it’s stored in the pantry, mold will start forming within a couple of days. In the fridge, it might take a week or so before mold will start appearing.

Mold will occur not just in an opened jar, but it can happen to an unopened jar as well. This usually happens when the jar hasn’t been properly sealed in the production process or the package got damaged and the air got into the jar.

If you don’t notice any mold in the jar, the next sign to look for the color and texture of the spaghetti sauce. If it’s bad, the sauce will usually be darker and thicker. However, spaghetti sauce that is darker and thicker doesn’t necessarily mean it’s bad, but the quality might not be good. You can throw it out at this point or continue to use it.

The last thing to look for is the smell of the spaghetti sauce. The good quality sauce will smell like fresh tomatoes. If it smells off or smells funny, it’s best to just discard it.

Is it OK to use expired spaghetti sauce?

It’s fine to use expired spaghetti sauce. The printed date on the jar is just a date indicating the date that the sauce will be of the best quality.  After that date, the taste and flavor will degrade slowly, but the sauce is still safe to consume.