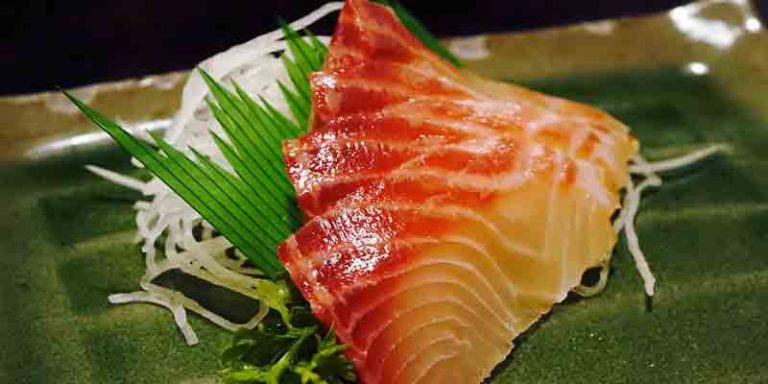 When it comes to raw fish, most people think of salmon and tuna meat.  These two are the most popular raw fish on the market.  In Japanese cuisine, it’s known as sashimi.  Most people will go out to eat at a sushi restaurant and order more than enough, so they can take leftovers home with them. Since raw fish goes bad fast, most people will wonder how to preserve them for later eating.

Can you freeze sashimi? If you’re going to eat it raw, yes, you should freeze it first. On the other hand, if it’s prepared sashimi, no you don’t need to freeze it.

Before you start eating sashimi, you should know that eating it improperly made could get you sick. Therefore, it’s a good idea to understand what sashimi is first.

Contents show
1 What Is Sashimi?
2 What is Sashimi Grade Fish?
3 Freezing Fresh Caught Fish
4 Sashimi Freezing Temperature
5 How To Freeze Fish For Eating Sashimi
6 Can You Freeze Sashimi Leftovers?
7 Storing Prepared Sashimi At Home
8 How To Tell When Sashimi Is Bad
9 Related Questions
9.1 How many calories are in sashimi?
9.2 Is sushi healthier than sashimi?

Sashimi is a thinly sliced piece of raw meat. It’s usually popular among fish, but it can be other raw meat as well. Popular sashimis are tuna and salmon.

On the other hand, sushi is different. It may contain raw fish, but it will have vinegar rice as the main ingredients and could include other ingredients such as eggs, imitation crab meat, seaweed, and vegetables rolled together.

When a raw fish is considered sashimi-grade, that means that the quality of the meat is high enough that it’s safe to be eaten raw.

Eating at popular sushi restaurants will guarantee that you’re getting sashimi-grade food. Also, at your local grocery stores and supermarkets, you may also find sashimi-grade meat.

If you are a fisherman and like to eat raw fish, you can make your own sashimi at home. Preparing sashimi at home will require some preparation and the right freezing temperature.

To fix the problem, you can either get a commercial freezer or decrease the temperature to at least -4F.

After you have set the temperature correctly, you can then freeze the fish for a minimum of 7 days before consuming it as sashimi.

Doing so will kill all the bacteria and parasites that may be living in the sashimi meat.

How To Freeze Fish For Eating Sashimi

Before you begin to freeze the fish, make sure it’s a quality fish first. By quality, it means the fish is fresh. In the supermarket, it’s hard to tell when the fish was caught.

Can You Freeze Sashimi Leftovers?

Usually, it’s not a good idea to freeze sashimi leftovers, especially those at restaurants. At the restaurants, sashimi quality fish have already been frozen once. By freezing it again, you can damage the quality of the fish.

Sashimi has already gone through the process of freezing and thawing. This process creates the meat of the sashimi to be soft. By repeating the process again at home, you’ll be disappointed to find that the sashimi is a slice of mushy fish meat.

Therefore, if you’re planning to eat sashimi and take some home, it’s best to eat it and not refreeze it.

If you’re one of those people who enjoy making sashimi at home, there are a lot of things to worry about. For one, raw meat like sashimi allows bacteria to grow quickly on it. Another one is raw fish gets spoiled really fast if left out at room temperature. Therefore, after preparing sashimi, you have to know how to store it properly.

Once you’ve prepared sashimi or sushi that contains sashimi, you have to eat it or refrigerate it within 2 hours.  However, it’s best to consume sashimi or any raw meat as soon as possible.

If not, bacteria can grow on it really fast due to exposure to the air. It’s not a bad idea after preparing sashimi to wrap it in an airtight container or plastic wrap right away.

Sometimes, you may eat sashimi and there are leftovers. After an hour, if you’re planning to eat it again or store it in the refrigerator, make sure to examine it first. The best way to tell if the sashimi is still fresh is to smell it. Fresh seafood does not have a fishy smell to it!

How To Tell When Sashimi Is Bad

Sashimi is a popular choice for an appetizer or main course at many restaurants. But how can you tell if the fish has gone bad? Sashimi is raw fish served without any additional ingredients. It’s often sliced very thinly and served with soy sauce and wasabi paste.

The main concern when eating sashimi is that you don’t want to get sick from bacteria or parasites in the food. Raw fish can contain bacteria and parasites, so it’s important to know how to tell if your sashimi has gone bad.

Here are some signs that your sashimi has spoiled:

Smell — If the fish smells like ammonia, throw it out immediately. Ammonia will make your stomach hurt and possibly give you diarrhea.

Texture — If the texture of the fish is slimy or mushy, throw it out immediately. This means that harmful bacteria have grown on the surface of the fish causing it to decompose quickly.

Color – The color of your sashimi can also be a good indicator of quality and freshness as well as whether or not it has gone bad. Freshly sliced tuna should be bright red in color with no brown spots on them.

How many calories are in sashimi?

If you’re looking to lose weight, but enjoy eating Japanese food, especially sashimi, you’re wondering what are the calories count.

Salmon and tuna are considered high-fat fish, which will mean they have a lot of calories. However, they also are rich in nutrition like healthy fats and proteins.

Is sushi healthier than sashimi?

Yes, sushi is healthier than sashimi because of the ingredients it has. Sushi will have vinegar rice, vegetables, fish, and soy in it. All of these combined can give you about 300 calories per slice of roll.

On the other hand, sashimi is just a thinly sliced piece of raw meat by itself. Sashimi will have roughly about 130 calories for 6 pieces (3 ounces).