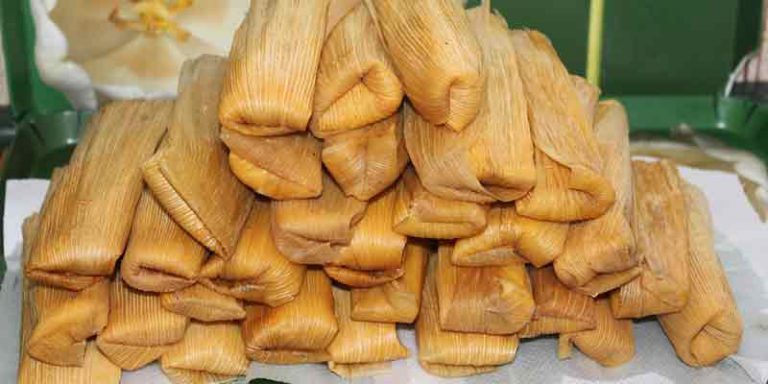 Tamale is a popular Mexican cuisine. This food is made from corn flour that is starchy and is steamed in either banana leaf or corn husk. Tamales can be filled with many different ingredients including fruits, vegetables, meat, cheese, and more.

Since tamales take hours to prepare, most people will make them in batches. For storage, can freezing tamales be one of the options?

Can you freeze tamales? Yes, you can freeze tamales, either cooked or uncooked. If it’s prepared and stored properly, tamales can last for about 3-6 months in the freezer. Also, the tamales will have little changes to their texture and flavor.

In this article, we’ll go through the details on freezing both cooked and uncooked tamales. Also, you’ll learn the different methods of reheating tamales so you can enjoy them like it was just made.

When freezing tamales, it’s usually better to cook them first. Cooking tamales first will ensure that no texture or flavor is changed when it’s frozen.

Tamales are one of that food that requires a lot of time preparing and cooking. For that reason, it makes sense to freeze them, especially when you’re short on time.

When freezing cooked tamales, you have to ensure that it’s packed properly before storing them. The original corn husk wrapping tends to be too flimsy and will break apart when it’s frozen.

Freezing tamales is quick simple and easy to do. Before freezing them, it’s a good idea to make an extra batch or two. One batch to enjoy the same day and the other batch for freezing. After all, tamales do take a long time to prepare and cook.

Follow the simple steps below to prepare and freeze tamales:

Before freezing the tamales, allow them to cool down by leaving them on a cooling rack. The tamales should cool down within an hour.

It’s recommended to not let them cool for an extended period of time. Doing so could cause containment by bacteria.

Therefore, check the tamales every 10 minutes to see if they are cooled down enough.

Also, allowing them to cool down will prevent condensation in the storage container when it’s freezing.

Once all the tamales have cooled down to room temperature, it’s ready to be stored.

For tamales, you can either use an airtight container or freezer bags. Both do a good job of keeping the tamales fresh in the freezer.

If you want to add additional protection for the tamales, you can use aluminum foil or cling wrapper to wrap them. Wrap each individually a couple of times and place them into the storage container. If some of the air does leak into the container, the wrappers will help prevent it from damaging the tamales.

Once the tamales are packed inside the container, seal them tightly. Make sure there are no leaks in the bag or the airtight container’s lid. Then using a marker, label the bag or container with the date of freezing.

Step 4: Storing in the Freezer

If you have limited room in the freezer, you can stack the tamales on top of each other. Make sure the tamales are completely frozen first before you do so.

The soft dough, known as masa, which is used to make tamales is quite perishable. It’s very soft and when it’s exposed to extremely cold temperatures, it tends to break apart.

For that reason, most people choose not to freeze uncooked tamales. The texture doesn’t hold up well in the freezer and that will affect the taste of it.

However, that doesn’t mean you can’t store tamales uncooked in the freezer. It just requires the right technique and preparation.

In order to freeze uncooked tamales, you can either pack the filling in the corn husk wrapping or pack a batch of filling unwrapped in an airtight container.

The key to keeping the texture from breaking apart during freezing is to keep them well packed. For that reason, it’s best to use an airtight container. Place the fillings in the container and press on the masa with your hand to tightly pack them in.

If you’re packing the filling in the corn husk wrapper, pack them as tightly as possible in the container. This will avoid the masa from breaking apart when it’s frozen.

How Long Can You Freeze Tamales?

Both cooked and uncooked tamales can last in the freezer for up to 6 months. After that time, it will still be safe to eat, but the quality of it will start to deteriorate.

You may notice that masa will have a loss in texture when it’s thawed. The masa will become dry and break apart. For this reason, tamales will not taste as good as they should.

To prevent the loss in quality of the tamales, you should try to consume them within 6 months. The less time that it’s stored in the freezer, the better it will taste.

How Do Fillings In Tamales Affect Freezing?

Tamales use different kinds of fillings that can affect how well they freezer. For fillings such as meat and shrimp, it will taste the same when it’s thawed and reheated.

However, for other fillings such as vegetables, it tends to not freeze very well. Vegetables will usually become mushy and watery after they are frozen and thawed.

Since the tamales will need to be cooked after it thaws, leaving the vegetable fillings uncooked is recommended. Once the tamales are reheated, they will reach the right texture and consistency.

Another type of fillings such as dairy can often be tricky to freeze as well. Cheese fillings tend to crumble during freezing and thawing.

If you’re planning to freeze cheese as a filling for your tamales, make sure there are other ingredients in there as well. This will prevent the cheese filling from becoming dry and crumbling when it thaws.

Also, tamales with cheese fillings should be eaten within 3 months, instead of the full six months.

How Do You Defrost Tamales?

To ensure tamales retain the flavor and texture, it’s best to defrost them in the fridge. After removing them from the freezer, place the frozen tamales onto a plate and let them sit in the fridge overnight or for at least 5 hours.

Once it’s thawed, you can reheat the tamales. Below are some great methods of reheating tamales.

If you don’t want to wait overnight for the tamales to thaw, you can thaw and reheat them straight from the freezer.

There are 5 different methods to defrost and reheat tamales. Some are better than others and you should see which method works best for you.

Below are the methods you can try to thaw and reheat tamales:

Instead of waiting for the tamales to thaw overnight, you can use a crockpot. This is the best option to thaw and reheat tamales. By defrosting them in a crockpot, you will get that same moist texture and taste just like the day you cooked them.

To cook tamales in the crockpot, start by filling the crockpot with 1/5th of water. Set the slow cooker to medium heat. Remove the tamales from the freezer and place them into the crockpot. Let it sit in there for 8-10 hours.

This is another method of reheating tamales, but it’s much quicker than using the crockpot.

However, since it’s going to be reheated much quicker, you won’t get the same depth of flavor.

Start by filling the steamer with water. To give it a bit more flavor, you can add some stock cubes to the steamer.

Once the water is hot, take the frozen tamales from the freezer and place them into the steamer.

The amount of time it takes to reheat the tamales will depend on how many of them you put in the steamer. The more you put in there, the longer it’s going to take.

For an average size of about 4-5 tamales, it should be reheated in about 40-50 minutes.

The oven is another great method to reheat tamales. It can be a bit time consuming waiting for the oven to preheat and then baking it.

Start by preheating the oven to about 420F. In the meantime, grab the number of tamales you want from the freezer. Unwrap the banana leaves or corn husk casing from the tamale. Then re-wrap the tamales with aluminum foil or baking paper. Make sure to wrap it tightly to remove air from it.

Once the oven is heated to the correct temperature, place the tamales over the rack. Keep them about 2-3 inches apart from each other to allow the heat to cook it evenly throughout. Cook the tamales for about 20 minutes. Every 5-10 minutes, flip the tamales around.

Using this method will give your tamales a crispy texture. Once the tamales are thawed, remove the husks and discard them. Cooking the tamales with the husk on the stovetop will not cook them evenly.

Next, put a teaspoon of cooking oil in a pan. Olive oil works great and is healthy to use. If you don’t have olive oil, you can use corn oil and vegetable oil as well.

Heat the cooking oil for about 3 minutes on medium heat. When the oil becomes hot, it will start to smoke slightly. Place the tamales in the pan and cover them with a lid so that they will cook faster.

Cook the tamales for about 5-10 minutes. Flip the tamales every 2-3 minutes until it’s light brown and crispy.

Once it’s cooked, place them onto a dry paper towel. This will absorb the cooking oil from the tamales. Let it sit there for about 5 minutes before you can eat them.

This method is only if you have serious tamale cravings. It’s the least recommended method to reheating tamales as it will risk them drying out.

If your tamales are frozen, you’ll need to thaw them in the refrigerator for about 1-2 hours before microwaving.

Place the tamales on a microwave-safe plate, keeping them spaced out. This will allow the heat to cook it evenly throughout.

Can You Refreeze Tamales?

It’s not recommended to refreeze tamales. After the tamales have thawed, they will become very soft. Freezing them again will cause the texture of the tamales to deteriorate.

While it will freeze just fine, the problem is when it’s thawed. More than likely, the masa will become dry and fall apart easily. Also, the tamales will not taste as good as they should.

Therefore, it’s a good idea to take the number of tamales from the freezer you need so you won’t end up with leftovers.

Other Questions about Tamales

Can you freeze tamales masa?

Yes, you can freeze masa and they freeze very well. Masa will need to the prepared first and they can be pre-shaped or not. Freezing them in an airtight container or freezer bag will keep them fresh for 3-6 months.

Can you freeze tamales in foil?

Yes, freezing tamales in foil is fine. Instead of using a cling wrapper or another type of plastic wrap, you can use aluminum foil. Wrap the foil around the tamales several times to prevent air and moisture from leaking in and destroying the tamales. Once covered in aluminum foil, place them in a large freezer bag and seal it tightly.