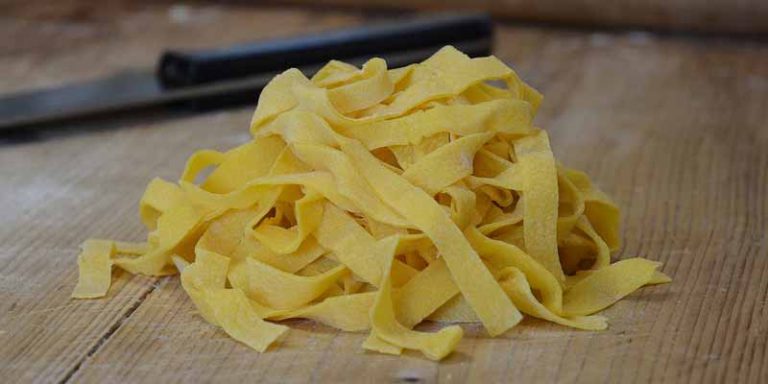 Egg noodles are very versatile as they can be used in stir-fry, soups, and even casserole. After making your delicious meal, you may end up with some leftovers. For that reason, you may wonder if you can freeze egg noodles.

So, can you freeze egg noodles? Yes, you can freeze egg noodles, and they freeze extremely well. You can either freeze them as cooked or uncooked. If it’s properly stored, you won’t be able to notice any differences in the texture or taste. Egg noodles will last for up to 3 months in the freezer.

If you’re freezing cooked noodles, make sure there are no sauces used on them. Doing so will cause them to become soft during freezing.

When it comes to freezing egg noodles, the process is straightforward.

Letting the cool could take up to an hour. To help speed up the cooling process, transfer them to another dish.

Place the egg noodles into a colander. Pour a bit of olive oil onto the noodle and give them a quick toss. The olive oil helps prevent clumping during freezing.

If you have a lot of egg noodles, it’s a good idea to separate them into portions before freezing them. This helps make it easier when defrosting them, and you won’t have to worry about any leftovers.

Place the egg noodles into the freezer. Once it’s in the bag, press on it gently to remove any excess air before sealing it.

On the freezer bag, write the date of freezing and the content. Then place them into the freezer for storage.

Allow the egg noodles to freeze completely before you stack them on top of each other. This is an excellent way to save space in the freezer.

How Long Can You Freeze Egg Noodles?

Egg noodles can be frozen for up to 3 months.

After that time, the quality of the noodles will start to deteriorate. The longer it’s in the freezer, the more it will lose its texture and flavor.

However, the egg noodles will still be safe to eat after that time. You just won’t enjoy the taste of it very much.

How Do You Defrost Egg Noodles?

When it comes to defrosting egg noodles, it’s best to place them in the fridge. This will allow the noodles to thaw without their flavor and texture being affected. Let it sit in the fridge overnight or for at least 6 hours before using it.

If you need egg noodles much sooner, you can use the microwave to thaw them. Simply place the frozen noodles in a microwave-safe bowl and use the “defrost” setting for 3 minutes.

Once it’s thawed, whether you used the microwave or fridge, you can reheat them using the frying pan, oven, or microwave.

Can You Refreeze Egg Noodles?

You can refreeze egg noodles, only if you defrost them in the fridge.

If it’s thawed in the microwave or on the countertop, you should not refreeze them. The texture and taste of the noodle will be affected. After it has been frozen and thawed for the second time, the egg noodle will become soggy.

To prevent any leftovers, so you don’t have to worry about freezing them again, is to freeze the egg noodles in portions. That way, you’ll need to take out only the noodles that you require at any given time.

Other Questions about Egg Noodles

Can you freeze egg noodles with sauce?

It’s best to avoid egg noodles that have sauce in them. The noodles won’t freeze well due to the high moisture content. Also, the sauce will cause the egg noodles to become soft when thawed.

Therefore, it’s better to freeze the egg noodles and sauce separately. Once you’ve thawed both, they can be added together.

Can you freeze egg noodles in soup?

You can, but it’s not recommended to do so. By freezing the egg noodles in soup, it will get mushy when it thaws. It’s better to freeze the egg noodles and soup separately. After the soup is thawed, you can add freshly cooked noodles.