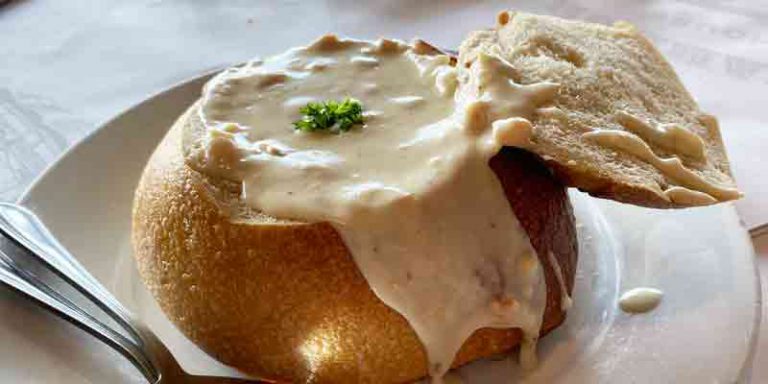 Clam chowder is a soup that can be enjoyed as a snack or a complete meal. They can either come as canned clam chowder or homemade. If you made some and find yourself with some leftovers, you’ll need to store them. Would freezing clam chowder be an option?

There are different versions of clam chowder. Each will have different ingredients used in the chowder. This will affect the soup’s texture and flavor when it’s frozen and thawed.

This is the most popular version of clam chowder. The New England clam chowder is made using traditional ingredients such as chopped clams, potatoes, and onions. Also, it has a heavy cream base and butter, which makes the chowder have a thick consistency.

This type of clam chowder originated in New York, particularly Manhattan. Manhattan clam chowder uses vegetable broth and tomato juice as the base. Unlike other types of chowder, no potatoes are added. This gives the Manhattan chowder a distinct red shade that has a thin consistency.

Therefore, Manhattan clam chowder is perfect for freezing since it doesn’t contain heavy cream and potatoes.

This soup originated in Rhode Island. It’s similar to Manhattan clam chowder, but instead of a tomato juice base, it is a broth base.

The broth is thicker due to the use of potatoes. Also, this chowder is often made with quahogs, which are a type of hard clams.

When it comes to freezing, Rhode Island clam chowder will freeze well due to the thick broth.

How To Freeze Clam Chowder

When it comes to freezing clam chowder, you can either freeze homemade clam chowder or any leftovers from the can.

If it’s homemade, it’s recommended to freeze them on the same day it was made. This will ensure the ingredients are fresh.

Below are the steps with details to freezing clam chowder:

Allow the clam chowder to cool down to room temperature. Wait until there is no steam coming off it.

If you freeze clam chowder while it’s still steaming, there will be condensation during freezing.

Once the clam chowder has cooled down, place them into an airtight container or freezer bag.

For an airtight container, check the seal on the lid for damages. If there are none, secure the lid to the container tightly.

For the freezer bag, squeeze out any excess air with your hand and seal it tightly.

Using a market, write down the date of freezing on the container or bag. Then place them into the freezer for storage.

For a freezer bag, if you have more than 1 bag and want to save space, you can stack them on top of each other. Make sure to let the bag of chowder completely freeze first.

Once it does, you can stack or stand them upright to save in the freezer.

The ingredients used are very important to how well the clam chowder will freezer. There are several ingredients you should avoid putting in the chowder if you’re going to freeze them. The ingredients include heavy cream, celery, and potatoes.

It’s better to put these ingredients in after that chowder has been thawed and reheated.

There are certain types of herbs and spices that can cause the clam chowder to become bitter. These include thyme, sage, basil, and cilantro.

If you’re planning to freeze clam chowder, avoid these herbs. It’s better to put the herbs when you reheat the chowder.

Bacteria growth on the clam chowder is dangerous as it could lead to food poisoning. Quick cooling of the chowder will help reduce the risk of bacterial growth.

If the soup is not left sitting at room temperature for a long time, the bacteria have little time to multiply.

To cool the chowder down quickly, place the pot of clam chowder in cool water. Make sure that the water doesn’t leak into the pot. Using a spatula, you can stir the soup to help cool it down quicker.

Can You Freeze Canned Clam Chowder?

Yes, you can freeze canned clam chowder, but not in the tin can. Freezing them in the can will result in the can breaking during freezing.

Instead, remove any leftovers from the can and transfer them to an airtight container.

If the canned clam chowder has not been opened, it’s best to store them in the pantry. As long as it’s not opened, the chowder will stay fresh for a long time.

How Long Can You Freeze Clam Chowder?

Clam chowder when properly stored will last for 4 to 6 months in the freezer. After that, the chowder will still be safe to eat, but the quality of it will start to deteriorate.

To keep the clam chowder fresh, always maintain a temperature at a steady 0 degrees Fahrenheit. A lot of fluctuation in the temperature could cause the chowder to go bad quickly.

How Do You Defrost Clam Chowder?

Therefore, it’s best to remove them from the freezer and cook them right away.

Place the frozen clam chowder into a saucepan and simmer over medium-high heat for about 15 minutes. As it’s reheating, stir the chowder briskly. Stirring is important to prevent curdling.

When the chowder starts to melt into a liquid, you can add other ingredients if you like. Most people like to add more herbs for more flavors.

If the consistency of the clam chowder is thick, you can add milk or broth to loosen it.

Can You Refreeze Clam Chowder?

It’s not recommended to refreezing clam chowder. Doing so will alter the texture and flavor of the chowder.

Refreezing the chowder will cause the texture to separate. While it will freeze just fine, the problem will be when you thaw them. As it thaws for the second time, the ingredients in the chowder will separate and cause them to lose flavors.

To avoid having to refreeze clam chowder, portion them out. This way, you’ll only need to take the amount of chowder from the freezer without having to worry about refreezing them.

Can you freeze clam chowder with cream in it?

Freezing chowder with milk or cream isn’t recommended. The clam chowder will not hold up well in the freezer. The ingredients tend to separate and have a grainy texture.

It’s better to add milk or cream once you thaw and reheat the clam chowder.

Can you freeze corn chowder?

Can you freeze fish chowder?

When it comes to fish chowder, it’s not recommended to freezing them. When it’s frozen and then thawed, the ingredients will separate and have a grainy texture to it.

It’s best to freeze just the chowder and leave the fish out. Once you thaw and reheat the chowder, you can add fish to the soup.