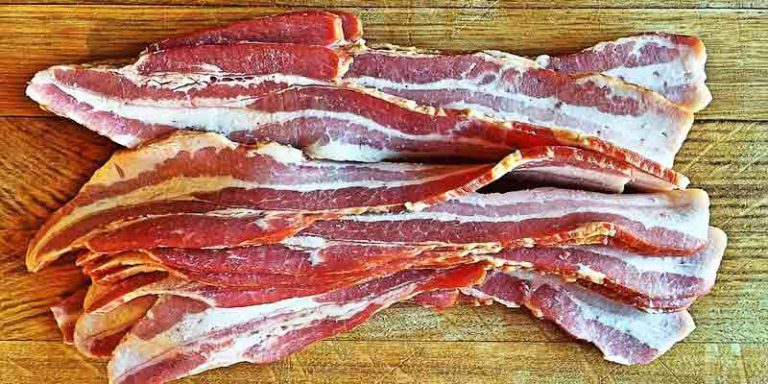 Who does not love the smell of cooking bacon? Bacon casserole, bacon salads, spaghetti with bacon, and bacon rolls are few names that come to mind when I think of bacon. After purchasing bacon because it’s a meat product, it will need to be stored. There are different ways you can store bacon. Would freezing bacon be an option as storage?

If you want to learn more about how to freeze bacon, keep reading.

Can You Freeze Bacon?

Yes, you can freeze bacon, whether it’s cooked or uncooked. Freezing bacon is a great way to save money and ensure you always have the meat on hand for cooking. It’s also a very easy process that shouldn’t take more than an hour, and you won’t lose any of the flavors!

Bacon is a cured meat product prepared from pork and usually cured with salt, although sometimes brine, and other ingredients such as brown sugar or maple syrup are used. It is first cured using large amounts of salt, either in a dry packing (often referred to as “dry curing”), or in a brine (a solution of water and salt).

Bacon is one of the most popular foods in America. Over 97% of American households consume bacon, which makes it one of America’s most popular snacks and breakfast foods. Bacon has been part of human diets for thousands and thousands of years and was first referenced in writing by Pliny the Elder in 70 AD.

It is true that bacon freezes well due to fats. The type of fat found in the pork belly is called unsaturated fat, which tends to solidify at lower temperatures. Since it is not as saturated as other forms of fats, the fat in the bacon doesn’t harden even when frozen.

If you need to store bacon for a while, freezing it is one of the best ways to do so. Freezing bacon can extend its shelf life and make it easier to thaw whenever you want it. Whether you need to freeze your entire package or just a few slices, there are several methods that will allow you to successfully freeze your bacon.

How To Freeze Bacon?

When it comes to freezing bacon, there are a couple of different methods. If freezing bacon is something that interests you, then we encourage you to give either of these methods a try! Freezing bacon is simple and can be helpful for anyone who loves cooking with bacon but doesn’t want to run out.

This is the well-packed bacon you buy from the store. You can freeze them with minimum effort. Cover the package with a tin foil cover and place it in the freezer. But if you are planning to use that bacon separately at different times. You can remove the package and separate them into smaller portions first.

But once you do that, you have to follow the below steps instead.

How Long Can You Freeze Bacon?

How long you can freeze bacon will depend on whether the package has been opened yet.

Freezing bacon in an unopened package and in a freezer bag will keep it good for up to 9 months. This is because of the lack of oxygen which prevents the growth of bacteria that would normally lead to spoilage.

On the other hand, opened uncooked bacon will last for about 3 months. Make sure it’s stored in a freezer bag to prevent freezer burn.

For cooked bacon, it will last for about 1 month. If you’re planning to freeze them, it is important not to overcook your bacon when you are cooking it. This will help preserve the flavor and texture while frozen.

Keeping your bacon frozen will prevent you from throwing away any unused portions and allow you to easily remove just what you need when cooking.

How Do You Defrost Bacon?

Defrosting bacon actually requires some time. First, you have to move them from the freezer area to the fridge. Let the bacon thaw in the fridge overnight or for about 6 hours. This will allow the bacon to thaw without the texture and flavor being affected.

Then directly move the bacon into the microwave and select the setting to defrost. Thaw it for about 2-3 minutes.

Once the bacon is defrosted, use them for cooking right away without letting them sit. Allowing the bacon to sit to long at room temperature could cause bacteria to start growing on it.

Can You Refreeze Bacon?

Refreezing bacon is not recommended, as it will cause the fat to separate from the meat. This will result in a less flavorful bacon strip, and you’ll have to reheat it for an extended amount of time. This can result in soggy bacon or undercooked strips if you don’t cook it long enough.

Also, there is a high chance of contamination if you refreeze bacon.

Therefore, to prevent having to refreeze bacon, try to remove only what you need from the freezer.

Bacon is a meat product we all love to eat. As you know it contains lots of fat within. But sometimes you may need to freeze the bacon for later use. You can decide the steps to follow, for that based on the conditions of the bacon. Once you freeze the bacon using the above methods you can preserve them for a very long time.