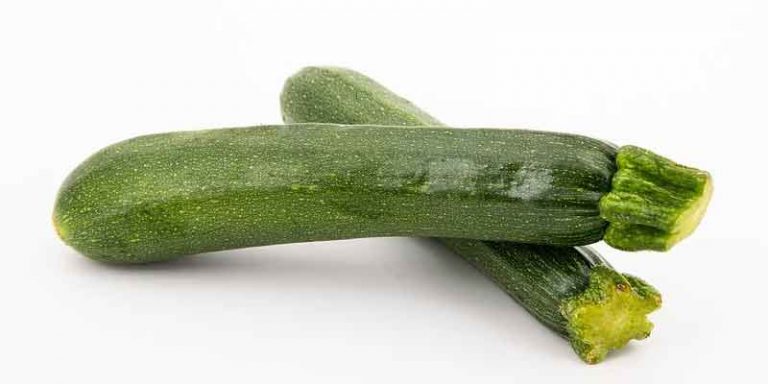 Zucchini is a summer squash that is available once a year. These vegetables are very popular in the kitchen due to their versatility. These squash can be used in soups, stews, stir-fries, and baked goods. Like other vegetables, zucchini does not last very long once they are harvested. To keep them fresh, it’s important to know how long zucchini last and how to store them properly.

Contents show
1 Zucchini Shelf Life
2 How Long Does Zucchini Last?
3 Can Zucchini Go Bad?
4 How To Tell When Zucchini Is Bad?
5 How To Store Zucchini
6 Can You Freeze Zucchini?
7 How To Keep Zucchini Fresh Longer
7.1 Purchasing Zucchini
7.2 Handling Zucchini
8 Related Questions
8.1 Is zucchini a vegetable?
8.2 What other names are zucchini called?

At room temperature, the whole zucchini will last for about 5 days. Afterward, they will start shriveling and lose their texture.

In the fridge, the whole fresh zucchini will last for about 2 weeks. Make sure to keep them in the crisper section of the refrigerator so they’ll remain fresh.

Sliced or cut zucchini will last for about a week in the fridge. While in the fridge, they should be stored in an airtight container.

Zucchini stored in the freezer will stay fresh for 6 months. It’s recommended to blanch them first before freezing them. Freezing raw zucchini will cause them to get freezer burn.

Zucchini can go bad in a couple of ways. This can be from while they are still in the garden or after it’s been harvested.

In the garden, if zucchini is not harvested while the fruit is still immature, it will start to deteriorate.

If they are left on the plant too long, they will start to become tough and lose their flavors.

In some instances, zucchini may rot before it can be harvested. This is usually an indication that the plant hasn’t been pollinated or suffering from blossom-end rot.

During the summer, some areas will receive higher rainfall than normal. Due to this, bees and other pollinators will not have a chance to pollinate the flower since they are less active.

As for blossom-end rot, this is due to over-fertilization or watering the plant too often.

In the kitchen, zucchini will usually go bad if they are not eaten or cooked within a certain time or due to storing them improperly.

Once zucchini is harvested, it will usually have a shelf life of 1-2 weeks.

How To Tell When Zucchini Is Bad?

Zucchini is easy to tell when they go bad. One of the signs of them spoiling is the skin will appear dull and wrinkled. However, this appearance doesn’t mean you have to throw them away. Check the inside to examine them further.

Slice the zucchini lengthwise and see if it’s spoiled or can be saved. Look at the flesh and see if there are any streaks of discoloration or soft spots. If only some part of the vegetable is bad, simply use a knife and cut away the damaged part.

On the other hand, if the discoloration or soft spots is throughout the entire vegetables, it’s best to throw them out. Trying to cook spoiled zucchini will not only taste bad, but it could also make you sick.

Another way to check the zucchini for freshness is to check the exterior of the vegetable. If it’s slightly rubbery, it’s a sign that it’s starting to lose freshness. It’s recommended to not serve them raw. Instead, cut them up and cook them in soups, stews, or stir-fries.

If on the skin is covered with rotten spots or molds, it’s best to throw them out.

However, if the zucchini is firm and plump, with the skin glossy, this is a sign that it’s fresh. These quality zucchini can be used to prepare any kind of meal.

How To Store Zucchini

At room temperature, store whole raw zucchini in a cool and dry place. Places like the pantry and the cabinet are great places to store them. For cut or sliced zucchini, they should never be stored at room temperature for longer than an hour. If it’s going to be longer, move them to the refrigerator until you’re ready to cook them.

In the refrigerator, for whole raw zucchini, store them in the crisper section for the best quality. When storing them there, avoid washing the zucchini. Any water that’s left on them could cause them to rot while it’s being stored.

For cut or sliced zucchini, they should always be stored in a sealable plastic bag or an airtight container. If the plant is exposed to the air, it will start to spoil due to oxidation.

The same goes for cooked zucchini that are stored in the fridge. After they have cooled down, transfer them to an airtight container or plastic bag.

Can You Freeze Zucchini?

Freezing zucchini is recommended if you’re planning to store them for longer than a month.

However, it’s not a good idea to freeze raw zucchini. Doing so will cause them to get freezer burn, which will shorten their shelf life.

If you’re planning to use them within a month, freezing raw zucchini is fine. If it’s going to be longer than a month, it’s not recommended.

To help keep zucchini fresh for a long time, you’ll need to blanch them first. Blanching zucchini will help preserve their flavor, texture, and nutrition while it’s in the freezer.

After blanching, always keep them stored in a freezer bag or an airtight container to prevent freezer burn.

However, if you have cooked zucchini, blanching is not needed. You can freeze cooked zucchini by flash freezing them first, and then placing them in an airtight container or freezer bag.

How To Keep Zucchini Fresh Longer

Zucchini will be of its best quality when it’s picked from your own garden. However, if you’re going to purchase vegetables whether it’s at the grocery stores or the farmer’s market, always check the quality of it before buying.

Zucchini sold at grocery stores don’t come with an expiration date so you’ll need to examine it first. Look for a firm squash that has shiny or glossy skin. If the zucchini is soft in the different parts, it’s like to be bad or go bad soon.

At the farmer’s market, the squash is usually fresh because they are harvested a day before it’s sold. However, during harvesting and transporting, it could get damaged. Pick each one and check its firmness of it. Also, check to see if there are any bruising or cuts on the zucchini. If there are, do not buy them. Damaged zucchini will have a very short shelf life.

Zucchini is a delicate fruit that should be handled with care once they are harvested. When storing them in a basket, never put a lot of them together. The weight could cause those on the bottom to bruise and get damaged. It’s best to set them next to each other.

When purchasing them from the grocery stores, it’s a good idea to put the summer squash at the top of the bag and keep them secured. Just a slight bruise on the zucchini could shorten their shelf life.

Is zucchini a vegetable?

It’s hard to believe, but zucchini is not a vegetable. Zucchini is actually a fruit because it develops from a flower. However, it’s mostly used as vegetables in the kitchen.

What other names are zucchini called?

Zucchini goes by different names depending on where you live. In the United States, these summer squash are known as zucchini. In Europe, it’s known as courgette. In South Africa, it’s known as baby marrow.