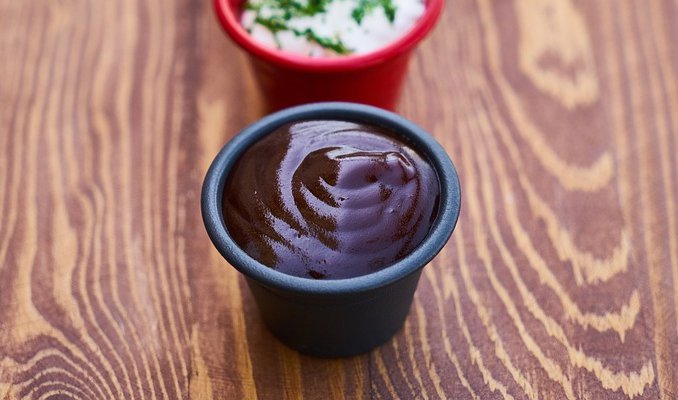 BBQ sauce is a favorite sauce for grilled foods and other foods that are cooked outdoors. Since the warmer weather is approaching and it’s barbecuing season, most will buy a big bottle of BBQ sauce or a couple of small ones with different flavors beforehand. Therefore, some people will wonder how long that opened and unopened bottle of BBQ sauce or will last. Better yet, how about the homemade BBQ sauce you’ve just made?

Above is just an estimated time of how long they should retain freshness. In most cases, the BBQ sauce will last longer, but the quality will not at it’s best.

In this short guide, we’ll go through how long BBQ sauce will last, the best place to store them, how to tell when they go bad, and how to keep the sauce fresh for a long time. If that’s the information you’re looking for, keep reading.

All bottles of barbecue sauce will come with a “Best By”date printed on them. The date is there to let you know when the sauce will still be at its best quality.

BBQ sauce tends to last much longer than the date on the bottle to the ingredients used. Barbecue sauce is very high in preservatives such as sugar and vinegar. Therefore, for an unopened bottle of barbecue sauce, they will last 6 months or even more after their expiry date.

For an opened bottle of BBQ sauce, you should always store them in the fridge. In the fridge, the sauce should last 4 to 6 months. The sauce will still be safe to eat after 6 months, but you’ll notice it will taste a bit different. This is due to the flavor being decreased from the coldness of the fridge.

For homemade BBQ sauce, they will stay fresh for about a week in the fridge. They should always be stored in an airtight container or a bottle to keep them fresh. Leaving them exposed to the coldness and the air, the sauce will go bad within a couple of days. 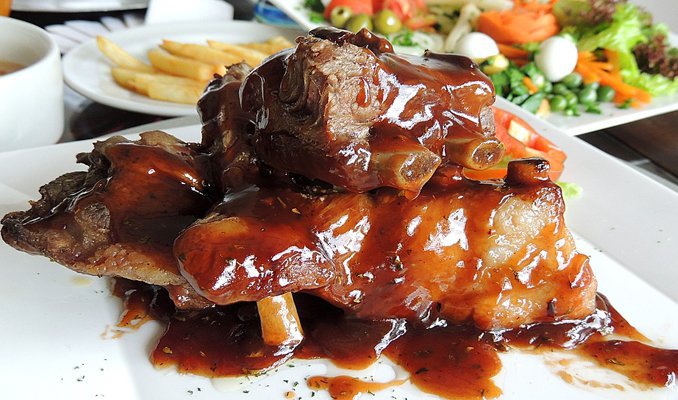 BBQ sauce deteriorates in terms of quality with time. The longer you store it, the higher the chances that it will go bad.

Ingredients used are another factor that causes the BBQ sauce to go bad. Nowadays, you pretty much can find barbecue sauce in many different flavors. Some have honey to make them sweeter, while others have salt to make them saltier. BBQ sauce even comes in spicy flavors. You can find those that a mild to extremely spicy.

Usually, when peppers are being added to the barbecue sauce, they tend to last much longer than a sauce that doesn’t use it. Pepper has properties that prevent bacteria from growing on them. Therefore, if you love the taste of spicy BBQ sauce, you can expect these types to last a very long time.

On the other hand, barbecue sauce that is sweet, tend to last not very long. This is due to the high sugar content in the sauce. Bacteria tend to grow on sauces that are sugary.

How To Tell If BBQ Sauce Is Bad?

BBQ sauce will go bad sooner or later and when they do, there will signs you should look for.

The first sign is the smell of it. For an opened bottle of barbecue sauce, if it has an odor that is off, throw out the sauce.

For an unopened bottle, if it has a little fermented smell to it, it should be fine, but you should taste it to make sure. After being stored in the bottle for a long time, the vinegar that’s in the sauce will start to become more acidity.

The last thing to look for is the texture of the sauce. Over time, due to the ingredients being used, the texture can become a little thicker than usual. If that’s the case, it might still be safe to consume. Look at the date on the bottle and if it’s not past the date, taste to see if it still tastes good. If not, it’s best to throw it out. 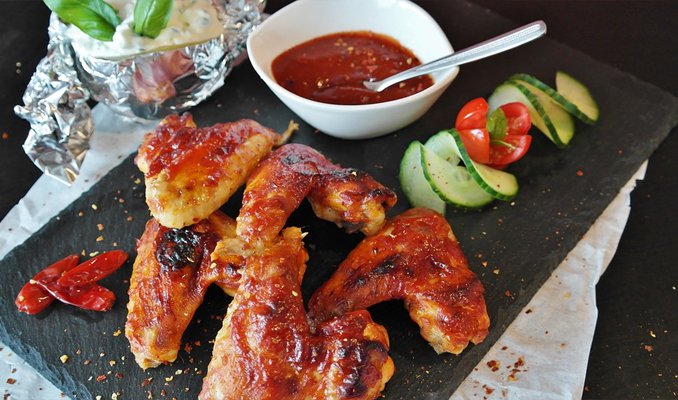 How To Store BBQ Sauce

For barbecue sauce, it’s pretty much the same as you would store other sauces, such as hot sauce or sriracha sauce.

Therefore, for an unopened bottle of BBQ sauce, they should be stored somewhere that’s cool and dry. The pantry is the perfect place for storage. The kitchen cabinet and cupboard are fine too.

An unopened bottle of barbecue sauce can be stored in the fridge as well. However, storing them there will not extend their shelf life. Since the bottle hasn’t been opened, there are no bacteria that can contaminate the sauce.

For an opened bottle of BBQ sauce, you should store them in the fridge when it’s not being used. The cooler it is, the fewer bacteria growth will occur. This means the sauce will last longer.

However, if you’re going to use the barbecue sauce within 2 weeks, leaving them at room temperature is fine. Just make sure to not leave them in direct sunlight or near heat sources.

Otherwise, any longer than 2 weeks, it’s recommended to store them in the fridge. If not, the sauce will go bad within a week.

For homemade BBQ sauce, you should always store them in the fridge. Never leave them outside the fridge as it will go bad quickly. Most homemade barbecue sauce will not have any preservatives added to them, which requires the cooler temperatures to keep them from going bad.

Can You Freeze BBQ Sauce?

Barbecue sauce can be frozen and they actually will freeze very well. If you’re not going to finish the bottle of barbecue sauce within 6 months or the fridge has limited space, freezing the BBQ sauce is a great option.

It’s important to never freeze the sauce in their original bottle, whether it be plastic or glass. As the sauce freeze, it will start to expand. This expansion will cause both glass and plastic bottles to crack.

For storage in an airtight container, be sure to pour the sauce into the container that has a tightly sealing lid. If not, the sauce will get exposed to the air in the freeze and will start to get freezer burn. Also, be sure to leave about half an inch of space at the top for the barbecue sauce to expand.

After it’s frozen, transfer the barbecue sauce cube into the plastic bag. Squeeze out as much air as you can out of the bag before sealing it. Then put the bags of sauce into the farthest section of the freezer.

Besides the plastic bags, you can put the cubes of barbecue sauce into an airtight container as well. Either one is fine and will keep the barbecue sauce fresh for up to a year. 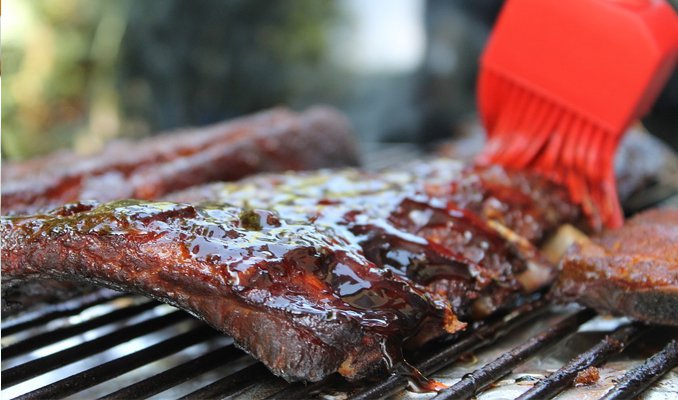 When buying the barbecue sauce, look for those that have just been made and put on the shelves. Most grocery stores tend to put new sauces at the back. BBQ sauces that are just made will taste the best.

Depending on how long you’ll be storing the sauce, you have different options when it comes to the size. If you’re going to be doing a lot of barbecue cooking, a big bottle is a right choice. Smaller bottles, on the other hand, are for those who cook not too often.

When it comes to handling BBQ sauce, it’s very important that you use clean utensils when scooping the sauce of putting any inside the bottle.

Of course, most people will use “dirty” utensils to handle the barbecue sauce because they forgot or just lazy to grab another clean utensil. Either way, it’s not a big deal as the sauce will not go bad because of it. However, using unclean utensils every time with the same bottle of BBQ sauce could cause it to go bad. Therefore, it’s best to stay on the safe side and always use clean utensils.

Another thing to remember is to never pour any leftover barbecue sauce back into the bottle. Once the sauce has been sitting at room temperature for a while, bacteria will start growing on them. If you pour it back in the bottle, it will contaminant the entire sauce with bacteria and cause it to go bad.

Should you marinate the chicken in BBQ sauce?

Marinating chicken in BBQ sauce is not a good idea. There is too much sugar in the BBQ sauce. As the chicken cook on the grill, the sauce will burn and leave you with a burnt chicken.

Do you put BBQ sauce on the steak before grilling?

If the steak has already been marinated, it is not necessary to add additional BBQ sauce to the steak while it’s grilling. However, if want a heavier BBQ flavor, you can baste some sauce a couple of time during the grilling process.