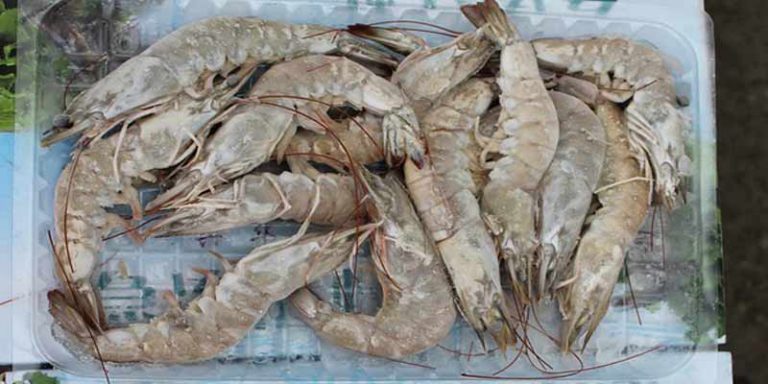 Shrimp is a popular seafood since it’s versatile and readily available at the fish market or your local grocery stores. Shrimp can be eaten fresh, added to a soup, make sushi, and as a cocktail. The most common type of shrimp that you’ll find at your local grocery store is white shrimp. These are wild-caught and can be very expensive if you’re not careful. Also, there are also farm-raised shrimp as well and they are much cheaper.

Whether you buy frozen wild-caught shrimp or farm-raised shrimp, you may wonder if they go bad when stored in the freezer.

So, does frozen shrimp go bad? Yes, frozen shrimp do go bad. When the shrimps go bad, it’s usually due to being frozen for a prolonged time. Shrimp that are properly stored will last in the freezer for up to 6 months. After that time, the shrimp will start to deteriorate in quality.

In the article, I will go more in detail about the reason why shrimp go bad, how to keep them fresh longer, and other related topics.

Contents show
1 How Long Does Frozen Shrimp Last?
2 How Fast Does Shrimp Spoil?
3 How to Tell if Shrimp Has Gone Bad?
4 What Happen If You Eat Spoiled Shrimp?
5 How to Correctly Preserve Shrimp?
6 Related Questions
6.1 Can you cook shrimps that are spoiled?

How Long Does Frozen Shrimp Last?

Shrimp freezes extremely well and can be kept frozen for up to a year.

It is important, however, that it be properly stored so that its quality remains high when it is cooked or used in recipes. When frozen shrimp is thawed out, it should be handled with care to prevent any damage from occurring.

Overly handling the shrimp while it is thawing will cause the flesh to break down more quickly, resulting in a mushier texture and a less desirable taste.

Shrimp can be refrozen after being thawed if necessary, but the quality of the seafood will deteriorate.

How Fast Does Shrimp Spoil?

After being frozen, shrimp deteriorate fast. Fishers frequently flash freeze shrimp just after capturing it to preserve and sell it, which means it has a shelf life as soon as the temperature rises over 40 degrees Fahrenheit. This lifespan is typically 2 days, so consume your shrimp as soon as possible after thawing, especially if you bought it chilled rather than frozen.

Frozen shrimp usually lasts three to six months after being captured, with variations depending on how soon it’s cleaned and frozen. Unfortunately, because it isn’t generally labeled, this is difficult to discern when purchasing from a supermarket.

If shrimp is left out in the “danger zone” (40-140 °F) for two hours, it will go bad. This is where freezing and thawing repeatedly comes into play.

For example, if you buy a huge bag of shrimp and take some out of the freezer to prepare. You risk ruining all of your seafood if you leave the bag on the counter while you prepare, eat, and clean up.

This means that it’s usually better to pull what you need right before cooking or freezing rather than taking out the whole bag of shrimp. It keeps you from forgetting to put it away and helps the remainder of your meal last longer.

How to Tell if Shrimp Has Gone Bad?

When the shrimp is frozen, you really can’t tell if it has gone bad. In order to see if the shrimps are indeed spoiled is to thaw them first.

Once it’s thawed, look for the following:

Smell – Fresh shrimp should have an “oceany” smell to it. If your shrimps have a bad smell, especially if they smell like ammonia, it’s time to discard them.

Texture – If you notice the shell is starting to fall off, this is a sign of bacterial growth. Also, if you shrimp’s head is removed and the flesh is pink, the seafood has gone bad. Fresh shrimp should have white meat, the shell firmly attached to the body, and smooth to the touch.

Also, check for slims on the shrimp. Fresh shrimp should not feel slimy. If it does, it is spoiled and should be thrown away.

Expiration Date – If you’ve bought shrimp from the supermarket, it will usually have an expiry date on the package. If it’s more than a week past the expiration date, it’s best to toss them out.

What Happen If You Eat Spoiled Shrimp?

You’ll probably notice if you’ve eaten bad shrimp pretty quickly. Eating rotten meat of any kind, including shellfish, may be unpleasant and hazardous. You probably have food poisoning if you’re vomiting, have severe stomach cramps, abdominal pain, or diarrhea. This is caused by eating meat (or basically any food) that has been contaminated with viruses or has deteriorated owing to hazardous bacteria development.

While food poisoning may usually be ignored, if it lasts more than 48 hours or you develop a fever, you should seek medical attention. As previously said, rotten meat can contain dangerous germs and viruses, putting you at risk of infection.

How to Correctly Preserve Shrimp?

From the meat department at your supermarket or fish market, ask for “frozen shrimp.” Shrimp are very perishable and go bad very quickly when it’s exposed to warm temperature. To keep them long enough to get them home, buy only shrimp that are frozen.

To thaw frozen shrimp, put them in the refrigerator overnight. Shrimp can also be cooked from frozen although they may be slightly tougher than fresh shrimp.  Cooked shrimp should always be rinsed with cold water before being added to a recipe.

The best way to freeze shrimp is to first peel the shrimp, then place them in an airtight bag with as little air as possible. When you’re ready to thaw the shrimp, place the frozen bag of shrimp into a bowl of lukewarm water for about 30 minutes.

Can you cook shrimps that are spoiled?

It’s not recommended to cook and eat shrimps that have spoiled. Some of the bacteria will still survive the cooking process. This could cause food poisoning. It’s best to not take any chance at eating spoiled shrimp.