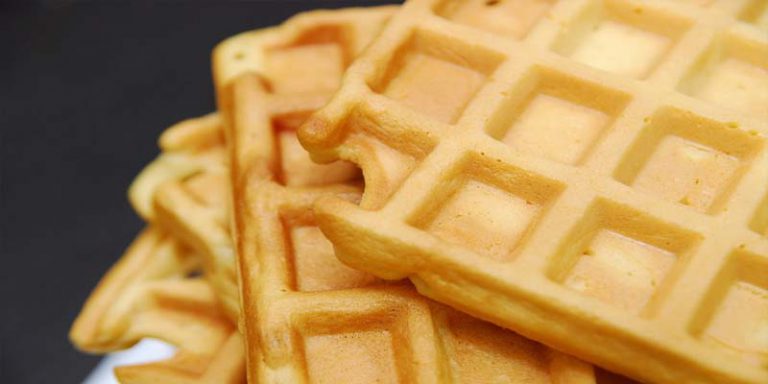 Breakfast waffles with butter and maple syrup are delicious. When you bite into a waffle that is crisp on the outside and soft on the inside, it gives you a tremendous sense of satisfaction – especially when you’re hungry.

Waffles can be topped with a number of delicious toppings in addition to butter and maple syrup. Fresh berries, banana slices, peanut butter, ice cream, chocolate sauce, whipped cream, and a variety of other toppings are among them.

Waffles can be cooked from scratch or purchased in a pre-packaged form that only takes a bit of additional cooking. When you’re running late for work and need to make a quick breakfast, frozen waffles come in handy. Instead of spending so much time preparing waffles from scratch, just toast frozen waffles in the waffle toaster for a few minutes.

But what if you don’t have access to a waffle toaster at home? Is this to say you won’t be able to eat your beloved waffle breakfast? You can prepare your frozen waffles in a variety of ways other than toasting them.

So, can you microwave frozen waffles? Yes, frozen waffles can be microwaved. Frozen waffles may be rapidly cooked in the microwave in 2-3 minutes if the temperature is set too high. To avoid overcooking and losing their texture, the waffles should be heated in 30-second intervals. The waffles will be crispy on the outside and fluffy on the inside if done correctly.

Microwaving Frozen Waffles- Here’s What You Should Know

A waffle toaster is the best way to reheat frozen waffles. You might not have a waffle toaster right now, though. Instead of skipping your waffle breakfast, try alternate options like microwaving the waffles.

Another thing to keep in mind while microwaving frozen waffles is that you can only microwave one waffle at a time. If the waffles are just going to feed one person, this isn’t an issue. However, if a big number of individuals are to be serviced, the procedure may take longer than expected.

How to Cook Frozen Waffles in the Microwave

Before we go any further, I’d want to underline the importance of keeping a close eye on your waffles while they cook in the microwave. If you get carried away with the microwave, you’ll end up with waffles that you will not enjoy.

Here are the procedures to follow as you prepare to make a batch of tasty waffles in the microwave:

Place the first waffle on a microwave-safe plate after removing the frozen waffles from their box. You should be aware that after frozen waffles have been opened, they cannot be kept at room temperature for more than 2 hours. Before things go bad, make sure you use them.

As I previously stated, as the waffle begins to heat up, you must pay great attention. Check the waffle after a minute in the microwave to see how much it has heated up. If you’re not pleased, turn the waffle around or flip it over and heat for another 30 seconds until it’s well cooked.

Repeat these procedures for the remaining frozen waffles you want to prepare.

Cooking Waffles in the Oven

Frozen waffles may also be cooked in the oven, in addition to the waffle toaster and microwave. An oven, unlike a microwave, allows you to cook many waffles at once. There’s no need to defrost frozen waffles before cooking them in the oven.

Simply take a baking sheet and line it with as many waffles as you can fit. Preheat the oven to 3,000 degrees Fahrenheit before putting the waffles in. Once that’s done, bake the frozen waffles on a baking sheet for approximately half an hour.

Cooking frozen waffles in the oven is a wonderful way to get a nice outcome. The oven is significantly slower than toasting or microwaving. It’s only possible if you have a lot of free time on your hands.

The following are some of the most commonly asked questions about how to microwave frozen waffles:

Is it necessary to thaw frozen waffles before reheating them in the microwave?

No, frozen waffles do not need to be thawed before being microwaved. Place them straight in the microwave for 1 minute to heat. Continue to heat for 30 seconds at a time until the waffles are totally thawed and cooked.

If you want to defrost the frozen waffles first, you’ll have to wait an additional 30 minutes.

How Long Can You Keep Frozen Waffles Out?

Frozen waffles should not be exposed to room temperature for more than 2 hours, according to USDA standards. If the waffles have been exposed for longer than that, they should be discarded.

If frozen waffles are maintained in their original packaging and kept in the fridge, they will last longer.

How Do You Make Crispy Waffles Again?

Place the soft waffles in a preheated oven at 2500 degrees Fahrenheit. Waffles should not be baked on a baking sheet. Instead, place them straight on the metal racks of the oven for around 5 minutes.