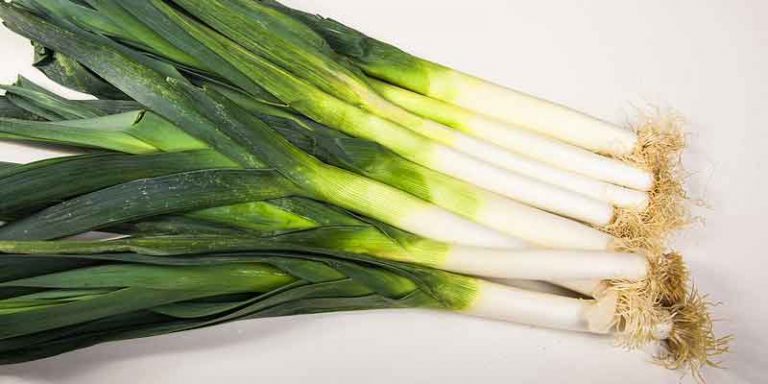 Leeks are one of those vegetables that’s very versatile. It can be used to garnish salad, used in soups, add flavors to the casserole, and so much more. These vegetables are available year-round, but most people like to buy them in bulk to store at home. Like other vegetables, leeks tend to not last very long due to their high water content. What if you need to store them for many months, would freezing them be an option?

So can you freeze leeks? Yes, you can freeze leeks and because of their high water content, they will freeze very well. If it’s properly stored, leeks can remain fresh in the freezer for up to 10 months.

Much like lettuce, leeks are high in water content throughout their leaves and roots. Therefore, these vegetables tend to freeze very well in the freezer. Also, with proper storage and prepping them using the blanching or flash freezing method, it can last for quite a long time too.

The temperature of the freezer can affect how well they freeze as well. The colder it is, the better it is for them to retain their quality. On the other hand, if the temperature is not that cold, especially if the freezer door is often open, the quality of it will start to degrade quickly.

Can You Freeze Chopped Leeks?

Chopped leeks are the best way to freeze this vegetable. By chopping them up first, you can grab the right portion you need and store the rest back.

Another reason is how quickly they thaw. Since the leeks are chopped into smaller pieces, they will almost instantly thaw once removed from the freezer. This will prevent you from having to wait until this vegetable thaw.

Frozen leeks that are chopped up can be added right away to meals that are being cooked. This will save you plenty of time when you don’t have a lot of time to prepare a meal.

However, chopped leeks do require some time to prepare before they can be frozen. Even though you’ll spend time preparing them, it will save you a lot of time at the end when preparing a meal.

Can You Freeze Whole Leeks?

Whole leeks can be frozen, but it’s not recommended to do so. The reason for that is the time it takes for them to thaw.

The whole leeks will take about an hour to thaw completely. Therefore, you won’t be able to cut the leeks and use them right away.

Another reason whole leeks shouldn’t be frozen is the space it takes up in the freezer. Since leeks are long, you may not be able to put a lot of leeks in a freezer bag. You’ll need to use a couple of freezer bags to store them all when chopped-up leeks can be stored in just 1 bag for the same amount.

Whole leeks frozen as a whole are possible, and they will freeze just fine. You’ll just end up waiting for them to thaw before you can start preparing them.

How to Freeze Leeks

Leeks that are blanched will stay fresh for up to 10 months in the freezer.

By flash-freezing leeks first, these vegetables will stay fresh for 7-10 months in the freezer.

If you have cooked leeks from a leftover meal, they too can be frozen. You’ll want to freeze them as soon as possible, so they’ll last as long as possible in the freezer.

Depending on what ingredients you’ve used, cooked leeks can last 1-2 months in the freezer. For best results, they should be consumed within 2 months after they’re put into the freezer.

When storing them in the freezer, cooked leeks should always be stored in an airtight container. The container should be sealed tight. Any leaks in the container can cause them to go bad really quickly. If cooked leeks are exposed to air, they will start to get freezer burn.

How Long Can You Freeze Leeks?

Leeks are one of those vegetables that stay fresh in the freezer for about 10 months. This is due to the leeks having a high content of moisture in them.

Also, using the prepping method such as blanching or flash freezing will ensure they retain their flavors and textures.

If you didn’t prep beforehand and just put them into a freezer bag, they will last for a maximum of 2 months. Sometimes, it can be even shorter depending on other factors. This could be the freezer temperature, how often the freezer is open, and how fresh the leeks were when it was frozen.

After that time, frozen leeks can still be eaten, but the quality of it will diminish.

A couple of months after their shelf life, the vegetables will still retain some of their flavors and textures. After 15 months, it’s best to just throw them out or use them in organic compost. The flavor will degrade to the point where it will just taste bland, instead of that onion taste.

How Do You Defrost Leeks?

The great thing about this vegetable is that you don’t really need to defrost them. There are two popular options you can use. By doing so, you’ll help retain their flavoring and texture.

Boiling – In a large pot, heat the water until it begins to boil. Add a pinch of salt to the water and drop the frozen leeks in. Leave them in the boiling water for about 5-10 minutes or until it’s cooked thoroughly.

In boiling water, leeks will thaw rather quickly so watch them carefully, so they don’t overcook.

Sauté – Place a pan over low to medium heat. It’s best to use a non-stick pan, but you can butter to prevent the leeks from sticking. Slowly cook the frozen leeks until they begin to thaw.

Never use high heat to thaw the frozen leeks. If you do, the outside of the leeks will thaw, but the inside will remain frozen.

Frozen leeks can go bad if it’s stored too long in the freezer or after being thawed.

In the freezer, with proper storage, they won’t go bad quickly. Leeks will stay fresh for up to 10 months, but after that, the quality will start to decrease. They will start going bad if it’s stored for more than a year in the freezer. At this point, the leeks will lose all of their flavor and texture caused by freezer burn.

If the leeks have been in the freezer for longer than a year, it’s best to just discard them.

As for thawing, due to their thin skin, they will thaw quickly, especially if it’s left at room temperature. The leeks will start going bad when you leave them to thaw for too long.

Once it thaws completely, the quality of it will start to decrease. If left to thaw for more than an hour or so, you’ll notice the leeks will become soft and mushy. This is due to the leeks sitting in a puddle of water.

What blanching leeks are important?

Can you refreeze leeks?

Once the leeks are thawed, they will become soggy and soft. If you try to freeze them again, the leeks will just be watery vegetables that have no flavors or textures to them.