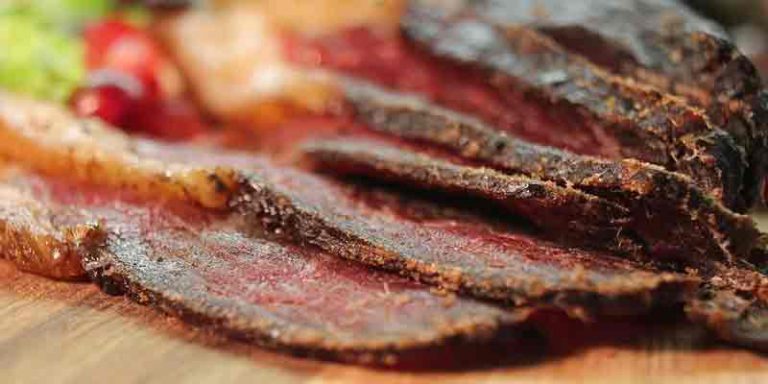 Jerky is a popular snack food item. Jerky is simply dried meat, which can be made from beef, pork, chicken, or turkey. It is dehydrated and seasoned with salt to remove the moisture. Most people will buy store-bought jerky and once it’s opened, it’s exposed to air. This will cause them to shorten their shelf life. You may wonder what options to have to keep them fresh longer. Would freezing jerky be an option?

Can you freeze jerky? Yes, you can freeze jerky. Freezing them will keep them fresh for up to 12 months. Jerky has a small amount of moisture in it which makes it difficult for bacteria to grow on it, so the freezer is a great long-term storage option. However, freezing jerky can affect the flavor and texture a little. This is usually caused by keeping the jerky in the freezer for too long.

Contents show
1 Does Jerky Freeze Well?
2 How To Freeze Jerky
2.1 Step 1: Place in Storage Container
2.2 Step 2: Sealing
2.3 Step 2: Label and Freeze Storage
3 How Long Can You Freeze Jerky?
4 How Do You Defrost Jerky?
5 How To Tell When Jerky Goes Bad
6 Can You Refreeze Jerky?
7 Other Questions about Jerky
7.1 What is white stuff on beef jerky?

Jerky contains very little moisture, so it will freeze well. Store-bought jerky will go through a process where it gets dried and has preservatives added to them. This is what keeps the jerky lasting for a very long time.

For homemade jerky, most people will not use any preservatives. You’ll have to make sure it’s completely dried before storing them in the freezer. If there is some moisture in the jerky, it can lead to the jerky sustaining freezer burn. This will cause them to go bad quickly.

How To Freeze Jerky

When it comes to freezing jerky, you don’t need any special skill set. All you need is an airtight container or freezer bag, and you’re good to go.

If you bought jerky from the grocery stores, and it has not been opened yet, you can just place them into the freezer.

On the other hand, if the package has already been opened, or it’s homemade jerky, you’ll need to prep them first.

Below are the steps with details to freezing jerky:

Enzyme and bacteria is the main reason for rot in jerky. When the bacteria are deprived of air, and it is stored in low-temperature settings, they will not be able to survive.

For that reason, it’s important to use a container or bag that’s airtight.

Whether the jerky is homemade or store-bought, place them into an airtight container or freezer bag.

For homemade jerky, make sure that has properly dried and cooled down first before storing them.

If using a freezer bag, press on the bag to remove any excess air from it before sealing it tightly.

If using an airtight container, check to see if there are any damages to the lid. If not, secure it to the container tightly.

With a marker, write the date of freezing on the freezer bag or airtight container. If you’re planning to reuse the bag, place a piece of paper tape onto it. Then write the date on there.

Once you have the label on it, place them into the freezer for storage.

How Long Can You Freeze Jerky?

Jerky stored in the freezer will last for up to 12 months. It can for much longer, but the quality of it will start to deteriorate as each month passes.

After 12 months, the jerky will still be safe to eat, but you won’t enjoy the taste and texture of it very much.

For the jerky to taste at the best quality, it should be consumed within 8 months.

How Do You Defrost Jerky?

The best method to defrost jerky is in the fridge. Remove them from the freezer and place them into the fridge and let them thaw overnight.

It’s not a good idea to thaw them at room temperature as it can cause bacteria to grow on them. Jerky that has a little moisture in it and will become a breeding ground for bacteria.

To prevent jerky from going bad, always place them into the fridge to let it thaw. The cool temperature will let the jerky thaw without becoming contaminated with bacteria.

How To Tell When Jerky Goes Bad

Jerky that is commercially packaged will last for about 12 months. However, if it’s not packaged properly or stored correctly, it can go bad before then.

Store-bought jerky has preservatives added to them to keep them lasting long. When it’s opened and stored at room temperature, it will only last for about 1-2 weeks.

When jerky starts to go bad, they will start to show signs of spoilage.

The first thing that you want to look for is mold growing on the surface of the jerky. Make sure to go through the entire bag to see if there are any with mold growing on it.

Another thing to look for is the texture of the jerky. When it goes bad, the jerky will become very hard.

The last thing to check is the smell of the jerky. If you open the package and a foul-smelling odor comes out, the jerky is bad.

If you notice any of the above, it’s advisable to discard it.

Can You Refreeze Jerky?

It’s not a good idea to refreeze jerky. Freezing the jerky more than once will cause them to deteriorate in texture and taste.

However, if it hasn’t thawed yet, you can refreeze jerky. This means the jerky was removed from the freezer and has not thawed. If that’s the case, you can simply place them back into the freezer without any texture or flavor change.

Other Questions about Jerky

What is white stuff on beef jerky?

Meat has mineral salts in it. As the jerky dries, the moisture will evaporate from the meat into the air. The salt is then left behind which will form a visible deposit on the surface of the jerky. The deposit will feel like powder, and it’s safe to consume.