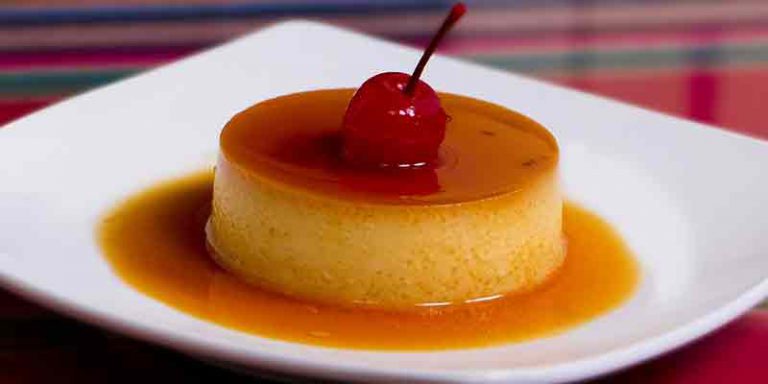 Flan is a dessert that’s popular around the world due to its soft texture and sweet flavors. This dessert is quite easy to make, but due to its delicate texture, it tends to not last very long. If you have any leftovers, you may wonder what storage options you have. Would freezing flan be one of the options?

So, can you freeze flan? Yes, you freeze flan. Due to their texture, flan freeze quite well. With proper storage, it will stay fresh in the freezer for about 1 to 2 months without any changes to its taste or texture.

Contents show
1 Does Flan Freeze Well?
2 How To Freeze Flan
2.1 Step 1: Adjusting the Temperature of Your Freezer
2.2 Step 2: Preparing the Flan
2.3 Step 3: Allow the flan to cool down
2.4 Step 4: Portion the Flan
2.5 Step 5: Wrapping your Flan
2.6 Step 6: Storage and Freezing
3 How Long Can You Freeze Flan?
4 How Do You Defrost Flan?
5 Can You Refreeze Flan?
6 Other Questions about Flan
6.1 Can you leave flan out overnight?

Flan is one of those desserts that can be frozen, but it needs extra care to ensure quality. This custard dessert is high in fat content, which means not freezing them properly will result in the texture separating when frozen.

Tomato Puree
How To Freeze Flan

When it comes to freezing flan, it doesn’t take a lot of time to prep them for the freezer.

One thing to be aware of is the fat amount in the flan. This means that it will have a lower freezing point than other baked goods. You’ll have to be careful when freezing this dessert. The most important factor to consider is the temperature of the freezer. If it’s not kept at the correct temperature, the flan will separate and turn into mush.

Step 1: Adjusting the Temperature of Your Freezer

Since flan requires a low freezing point, it’s important to adjust the temperature of the freezer first. It will take a while to let the freezer reach the right temperature.

Remember, flan needs the correct temperature, or it will not freeze well.

Step 3: Allow the flan to cool down

Once it’s cooked, take it out from the oven and let it sit at room temperature. Allow it to cool down completely before taking the step.

If you try to store them in the freezer while it’s hot, it will cause condensation. This will result in moisture forming in the container. When the flan is thawed, it will become mushy due to the moisture melting.

Smaller pieces of flan freeze better than large ones. Also, portioning them will prevent any leftovers. Flan cannot be frozen again once it thaws.

Cut the flan into portions and set them aside.

This is an important step to freezing the flan. Wrapping the flan will protect them from the air, moisture, and unwanted flavors while it’s frozen.

There are two methods to do the wrapping:

Wrap each portion of the flan individually with freezer paper. Make sure every part of the flan is covered. Then wrap again in several layers of plastic wrap.

Wrap the pieces of flan separately with several layers of plastic wrap. Make sure to not wrap it too tight where it will squash the flan. Then wrap it once more with aluminum foil.

Once the flans are wrapped, place them into a freezer bag. Avoid putting too much where it will press against each other and get damaged.

Then press on the bag with your hand to remove any excess air and seal the bag tightly.

With a marker, write the date of freezing on the bag. This helps you keep track of how long the flans have been stored. This is useful especially when you have a lot of food items stored in the freezer as well.

Place the flan into the freezer for storage. Make sure that it lays flat in the freezer.

How Long Can You Freeze Flan?

Due to their delicate texture, flan doesn’t have a very long shelf life in the freezer. You can only freeze flan for about a month or two.

After that time, the flan will start to deteriorate in quality. The texture will start to separate and lose some of its flavorings.

After about 2 months, you can still eat flan, but you may not enjoy it very much. For that reason, it’s recommended to consume this dessert within a month for the best taste.

How Do You Defrost Flan?

Flan is easy to defrost and is straightforward. Simply remove the portion you want from the freezer, and leave it to thaw in the fridge for a couple of hours.

On the other hand, if you enjoy your flan hot, remove them from the freezer and place them on the countertop for about 20 minutes. Keep the flan wrapped while it’s thawing at room temperature.

Once it’s warm enough, unwrap the flan and reheat it in the oven at 150 degrees Fahrenheit for about 10 minutes or until it’s nice and hot.

Can You Refreeze Flan?

It’s not recommended to refreezing flan. Flan has a very delicate texture and will easily break apart. By freezing it more than once, the texture of the flan will be altered greatly. When it’s frozen and thawed for the second time, you will notice the texture is mushier and the taste of it will be bland.

To avoid having to refreeze flan, it’s best to freeze them in small portions. This way, you’ll only need to remove what you need without having to worry about any leftovers and freezing them again.

Other Questions about Flan

Can you leave flan out overnight?

It’s not recommended to leave flan out overnight, especially when the room temperature is extremely hot. Doing so could cause food poisoning and make you extremely sick.

Flan is made with eggs, milk, sugar, and vanilla. Eggs and milk are quite dangerous to leave out at room temperature due to the risk of contamination from bacteria.

Any leftover flans should be stored in the fridge until you’re ready to eat them again.