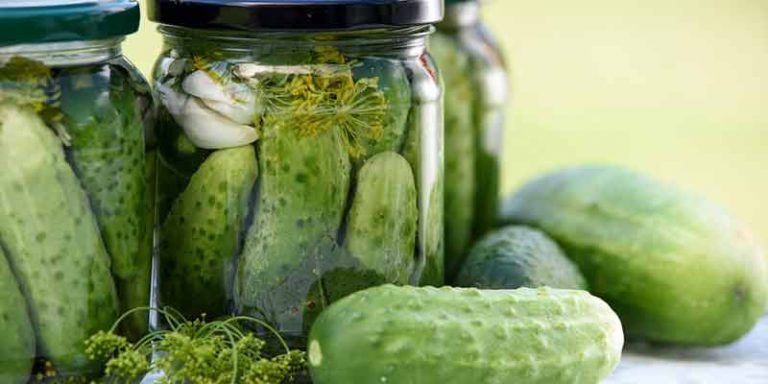 If you want to store dill pickles for a long time, would freezing them be an option?

Yes, you can freeze dill pickles. Properly stored, dill pickles will last for up to 6 months in the freezer. Make sure to use a glass jar that’s safe for freezer usage. Otherwise, the freezing temperature will cause the jar to crack.

Dill pickles freeze very well due to the high water content. When freezing them, it’s important to use a brine solution so that the flavor and texture will not change. Using just plain water will cause the dill pickles to become mushy over time.

How to Freeze Dill Pickles

You can freeze dill pickles that are homemade or store-bought. Both freeze well and will retain their quality for a long time. The only problem you may encounter is finding the right size jar to store them. The jar will need to be freezer safe.

Below are the steps to freezing dill pickles:

Get the dill pickles ready. If you have made some at home, make sure the recipes are complete and keep the brine. You’ll need the brine when freezing the pickles.

Once the dill pickles are ready for freezing, place them into a glass jar. Again, make sure that the jar is safe for the freezer. Otherwise, it will crack, and you’ll end up with a mess to clean up.

Place all the dill pickles into the jar. Make sure you don’t pack them too tightly together. There should be enough room to move them around.

If you have a lot of pickles, use several jars to store them.

Once all the pickles are in the jar, you’ll need to use brine to preserve them. It’s not a good idea to use water as it will dilute the flavors of the pickles.

If you don’t have brine, you can simply make some. All you need is salt and water. Mix 4 tablespoons of salt per 1 quart (4 cups) of water. Use a spoon to mix until all the salt is dissolved in the water.

Pour brine into the jar until all the pickles are submerged.

Place the lid on the jar and seal it tightly. For extra protection, you can cover the entire jar with a freezer bag. This will help prevent the cold air from destroying the dill pickles.

Using a marker, write the date of freezing on the jar. You can use paper tape to make it easier to write on the jar. Then place the jar into the freezer for storage.

How Do You Defrost Dill Pickles?

When it comes to dill pickles, there is only one method to thaw them. You need to take them out of the freezer and place them into the fridge. Leave it in the fridge to thaw completely, which can take up to 3 days. By letting it thaw slowly, the dill pickles will retain their flavor and texture.

Don’t leave the frozen dill pickles at room temperature. This will cause the pickles to thaw unevenly, which could damage them.

How Long Can You Freeze Dill Pickles?

Properly prepared and stored, you can expect your dill pickles to last for up to 6 months in the freezer. The pickles will last for much longer, but their quality will start to deteriorate.

It will be safe to eat after 6 months or even a year later, but you may not enjoy the taste of it very much.

For the optimal quality of the dill pickles, I recommend that you try to use them within 6 months.

Whether the dill pickles are frozen or fresh, they will eventually go bad as the month passes. When it does, the pickles will show signs of spoilage.

Dill pickles can go in one of the following ways:

They start to grow mold. This will usually happen when the pickles aren’t fully submerged in the brine. The part that’s exposed to the air will start to develop mold. However, this may take up to a few months before you’ll notice any mold growing on the dill pickles.

They become too sour to eat. When dill pickles are stored too long, usually at room temperature, they will become even sourer. The flavor will be too sour for most people to enjoy.

Fizz in the jar after opening. After the jar is opened and there’s fizz, it’s usually fine. This happens when the fermentation process slows down. However, it’s a good idea to taste it to see if it still tastes good. If it is too sour for your taste, it’s best to discard them.

Can You Refreeze Dill Pickles?

It’s not recommended to refreezing dill pickles. Freezing them more than once will cause the quality of the pickles to deteriorate. After it’s frozen and thawed for the second time, you’ll notice the pickles are mushy and lost a lot of their flavors.

However, if the frozen dill pickles have not thawed at all, you can refreeze them. This means if you took them out of the freezer for less than 5 minutes and had a change of plan, you can place them back into the freezer. The texture and taste of the pickles will not be altered since it’s still frozen.

Can you freeze pickles in a plastic container?

Yes, you can freeze pickles in a plastic container, but it needs to be freezer safe. Otherwise, the plastic container won’t be able to withstand the freezing temperature, and will eventually crack.