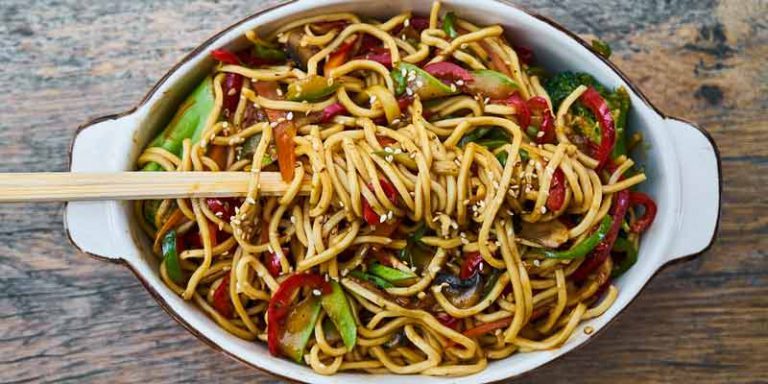 Chow mein a popular Chinese dish that people often eat due to the flavors and soft texture. Some will buy chow mein from the restaurant and others prefer to make them at home. Either case, most will want to store them for later. Would the freezer be one of the storage options?

Can you freeze chow mein? Yes, chow mein can be frozen. Properly storing the stir-fried noodles in an airtight container or freezer bag, chow mein will last for up to 3 months in the freezer. Defrosting the chow mein in the refrigerator will prevent changes in texture and taste.

Chow mein is made with Chinese egg noodles, which are wheat noodles with eggs added. Due to the ingredients used, egg noodles freeze quite well in the freezer.

Once chow mein is cooked, it will retain some moisture which makes it freeze well.

If it’s stored in an airtight container or freezer bag, it will suffer very little changes to the texture and flavors.

Can you Freeze Takeaway Chow Mein?

Yes, you can freeze takeaway chow mein. However, you’ll need to freeze them as soon as possible. The longer it takes to freeze them, the more the texture will change.

Chow mein is usually made fresh and consumed within an hour. After that, the noodle will begin to get soft due to the moisture in it.

Therefore, if you know you’ll have a lot of chow mein leftovers, freeze them as soon as you can. Otherwise, consume them right away or store them in the refrigerator.

How Long Does Chow Mein Last in the Freezer?

Due to the high moisture content when chow mein is cooked, it will not last very long. At room temperature, it may last for about 1-2 hours. In the fridge, it will last for about 3-4 days. If you need to store them longer than that, the freezer is the best option for it.

In the freezer, chow mein will last for up to 3 months. After that, the stir-fry noodles are still safe to eat, but the quality of it will start to diminish.

For the best result, you should try to consume chow mein within 3 months.

How To Freeze Chow Mein

Chow mein is quite simple to freeze as it doesn’t require any prepping. Before you freeze them, there are two things you should be aware of.

The reason for this is the moisture in chow mein. As it cooked, the noodles will absorb water into it. Bacteria and other pathogens grow rapidly in a moist environment.

Second, avoid freezing chow mein that’s still hot or warm. If you put the noodles into an airtight container or plastic bag, it will create condensation in there. As a result, there will be excess water when thawed.

Additionally, food that is still hot can affect other foods that are in the freezer. As it is being stored, the temperature will rise slightly due to the heat from the hot food. Food around it could thaw and be damaged.

Now that you know what to avoid, here’s how to freeze chow mein:

Freezing chow mein in an airtight container or freezer bag will keep them fresh for up to 3 months. 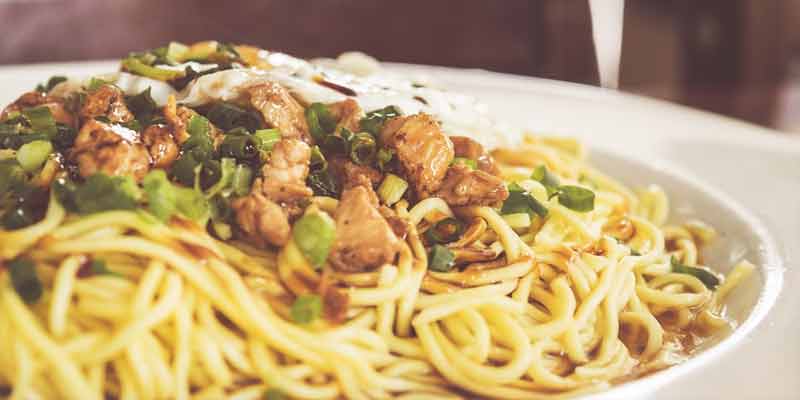 How To Defrost Chow Mein

When it comes to defrosting chow mein, the best way is to place them in the refrigerator. For the best result, let them thaw overnight or at least 6-8 hours. By doing so, there will be minimal texture and flavor changes.

Letting it defrost at room temperature is not recommended. As the chow mein starts to thaw, not all of the noodles will thaw. Only the outside part will thaw, while the inside is still frozen. This will cause parts of the noodle to get soft and lose flavors.

If you need to use chow mein quickly, you can reheat the noodles in a frying pan. As the noodles are being cooked, add some water to it to prevent it from drying out. As mentioned above, you may experience some texture and taste to be not that fresh as it should. The noodles will be softer and it will not be as flavorful.

Can You Refreeze Chow Mein?

Once the chow mein is frozen and thawed, never refreeze them again. Doing so causes the noodles to break apart and a loss in flavors.

Chow mein noodles are high in moisture once it’s cooked. As it freezes, the noodles will actually start to expand slightly. This is the reason why it’s a good idea to leave some room in the airtight container or freezer bag so the noodles can expand.

As the noodles thaws, the texture will become softer due to the noodles breaking apart. Therefore, when you try to freeze chow mein again, it will freeze well. The problem starts when it thaws for the second time. Instead of a nice firm texture, you’ll end up with soggy and soft noodles with no flavors to it.

Can you reheat chow mein?

Yes, chow mein can be reheated. Before reheating the noodles, make sure to let it defrost in the fridge overnight or at least 6-8 hours. Trying to reheat chow mein that’s not fully thawed will result in a mussy texture and loss of flavors.

Once the noodles are fully thawed, heat the frying pan at medium heat and add a bit of oil. Then toss the chow mein into the pan and stir the noodle continuously. Doing so will reheat them quickly and evenly.

If you need to reheat chow mein quickly, place the frozen noodles in the microwave and set the setting at defrosting for 5 minutes. After that, check to see to make sure it’s not dried. If so, add some water and microwave it for several more minutes.

Reheating chow mein in the microwave will cause it to become softer and mushier than noodles reheated in the pan.